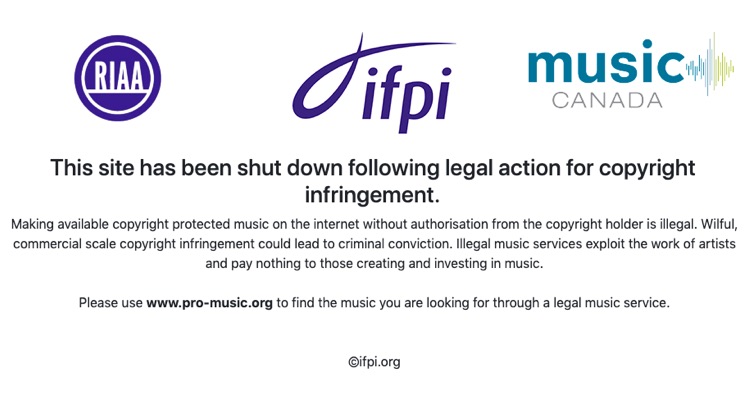 Several weeks ago, the RIAA managed to take down YouTubNow, a major YouTube stream-ripper, with just a subpoena.

Shortly after the major music organization’s court filing, the website, which boasted about its “powerful” service, went down.

“Sorry, the site is currently under maintaining.”

Going on the offensive against stream-ripping technology, the RIAA then targeted Y2Mate earlier this week.

The popular YouTube stream-ripper receives over 64 million unique visits each month.  It currently ranks as the 570th most-visited site around the world.

According to the RIAA, though, Y2Mate offers “recordings which are owned by one or more of our member companies and have not been authorized for this kind of use.”

Unfortunately, and unlike YouTubNow, the site’s owner – known only as ‘Muvi’ – has long prepared for the filing.

Not willing to back down, Muvi noted Y2Mate only exists to “create a copy of downloadable online-content for the private use of the user (‘fair use’).”

“Muvi does not grant any rights to the contents, as it only acts as a technical service provider.”

While the RIAA may engage in a prolonged battle with Y2Mate – as it currently has with FLVTO and 2Conv – the major music organization has scored yet another key victory in a different piracy front.

In a coordinated effort, the RIAA, the IFPI, and Music Canada have successfully managed to take down DBR.

DBR’s owner didn’t give a reason for the site’s closure.  Instead, its domain name now forwards to a message from all three major music organizations.

“This site has been shut down following legal action for copyright infringement.

“Making available copyright-protected music on the internet without authorization from the copyright holder is illegal.  Willful, commercial scale copyright infringement could lead to a criminal conviction.  Illegal music services exploit the work of artists and pay nothing to those creating and investing in music.”

As with YouTubNow and Y2Mate, the RIAA had requested a subpoena from the United States District Court for the District of Columbia against Cloudflare.

“We have determined that users of your system or network have infringed our member record companies’ copyrighted sound recordings.  Enclosed is a subpoena compliant with the Digital Millennium Copyright Act.”

Like YouTubNow, DBR quickly folded its cards and preferred not to take on the music industry, shutting down its website instead.  According to a separate report, the IFPI had promptly identified and contacted the site owner, who agreed to stop the illegal activities.

“On behalf of our member record companies, IFPI, RIAA, and Music Canada identified and contacted the site operator who has now agreed to shut down the site completely and not to infringe sound recording rights in the future.”

Sources claim the website was hosted in Canada, thus the reason for Music Canada’s involvement.