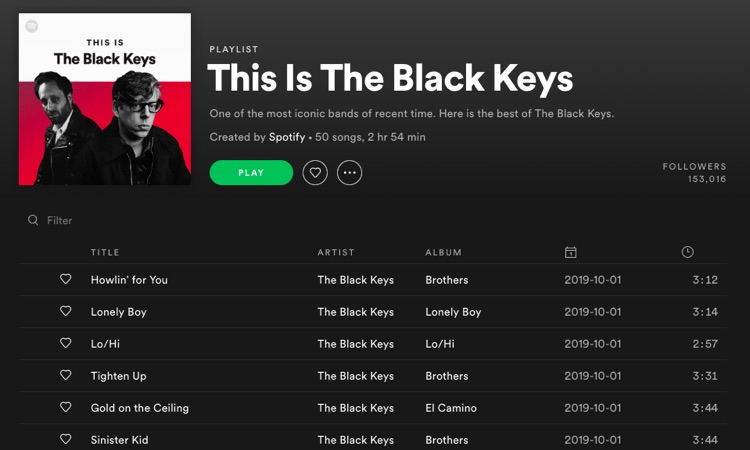 The Black Keys on Spotify, October 2019

The Black Keys aren’t the only band feeling stiffed by streaming platforms like Spotify. But given the group’s level of popularity and profile, their complaints got a lot more attention.

Back in 2012, Black Keys drummer Patrick Carney decided he’d had enough with Spotify’s abysmally-low royalty payouts. He took aim at Sean Parker, a Spotify board member who also happened to be a Napster cofounder. At SXSW, Parker claimed that Spotify would easily earn an artist more money than iTunes, a statement that prompted Carney to attack.

“He’s an asshole,” Carney brusquely responded when asked what he thought of Parker’s assessment.  “The guy has $2.5 billion he made from figuring out ways to steal royalties from artists, and that’s the bottom line. You can’t really trust anybody like that.”

“You can’t make money on [streaming] – trust me – [Black Keys guitarist and vocalist] Dan [Auerbach] and I like to make money. If it was fair to the artist we would be involved in it, but it’s not.”

“I honestly don’t want to see Sean Parker succeed in anything, really.  I imagine that if Spotify does become something that people are willing to pay for, then I’m sure iTunes will just create their own service, and do it themselves.  And they’re actually more fair to artists.”

A few things have happened since that interview.

The Black Keys eventually gave in to Spotify and licensed their complete catalog to the platform. Apple also created a streaming music service of its own, Apple Music, which is regarded as far more artist-friendly than Spotify.

What we didn’t know, however, is that Spotify CEO Daniel Ek attempted to intercede after Carney’s comments.

In a recent interview on the Joe Rogan Podcast, Carney described the call with Ek.  Instead of broiling the Spotify CEO, Carney called Ek “a nice guy, very intelligent,” while relaying the matter-of-fact discussion.

“He basically, without explaining it directly, was saying that he’s paying our label to get our music,” Carney said.  “What they do with the money, he can’t control.  At that moment, I realized, ‘oh yeah, there’s some stock being floated to these companies’. Which there was — billions of dollars of stock was sent.”

Warner Records, the Black Keys drummer relayed, “gave us like a couple hundred thousand dollars of the billion. They paid it to us in the way the label does: they paid it as an artist royalty and took all these deductions out of it, and it was a made-up number.”

And no the topic of Warner, Carney wasn’t finished — not by a long shot.

“The craziest thing is this: We’ve sold millions of records, we’ve made between the two of us 60-plus albums, and the last time I finished a record that I’m really proud of and sent it to Warner Bros. [Records], they didn’t even fucking respond to the email. When that shit happens, you know what you wanna do? Tell them to fuck themselves. And now we’re in a situation where our contract is done.”

When asked if he needed a major label to succeed, Carney didn’t need much time to ponder. “Fuck no,” Carney said. “It’s so infuriating to have been in this business for 20 years and be treated like dog shit.”