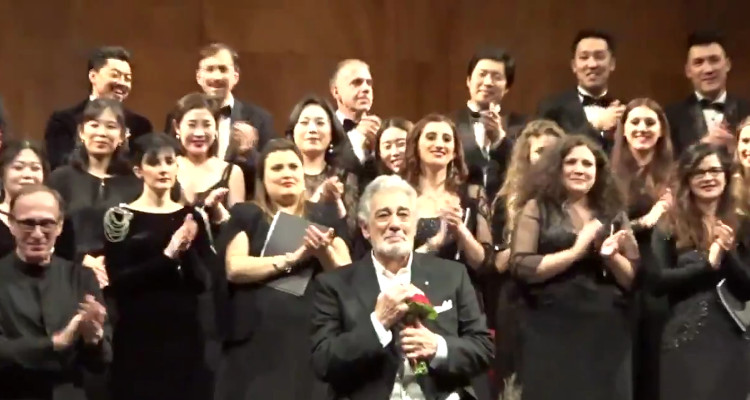 While the career of operatic tenor Plácido Domingo largely became derailed in North America due to allegations of sexual impropriety, he reportedly recently received a 30-minute standing ovation after performing at the La Scala 50th Anniversary Concert in Milan.

Domingo first performed at La Scala on December 7, 1969 and has since performed there 135 times within the context of 22 different operas. During the ovation, it is said that he became so overwhelmed that he kissed the stage.

While many U.S. opera houses have canceled performances by Domingo in the wake of shocking reports by the Associated Press that the singer had sexually harassed or had engaged in sexually inappropriate behavior with 20 women, his popularity in other parts of the world, especially in his native Europe, has not seemed to wane.

Domingo has not wavered in his contention that he is innocent of all charges. In a recent interview, he insisted that he always acted in a gentlemanly manner with women while adding, “gallant gestures are viewed differently nowadays.”

He has also said that, in spite of all the cancelations in North America, he plans to continue performing at least through 2021, at the engagements that he has scheduled up until then.

Many women were among those who came out to see Domingo perform at La Scala. Doris Papst, who traveled all the way from Germany, told Billboard, “I’m very much impressed. Plácido Domingo’s voice is still unbelievable, if you see how old he is. What has happened with him with #MeToo in the United States is horrible. We all have to answer in our lives for our behavior. We should not be the judges.”

Giuseppina Uscidda, who has seen Domingo perform at La Scala for four decades, added, “His voice is beautiful. This evening makes clear how much the audience loves him.”