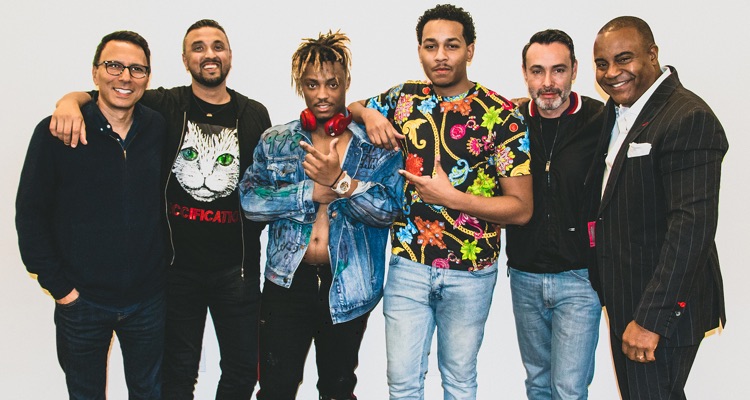 Better Days: Juice WLRD after inking a major deal with BMG in 2019.

Juice WRLD, aka Jarad Higgins, died from a massive overdose of oxycodone and codeine, according to an autopsy report from the Cook County Medical Examiner’s Office. The rapper stuffed a large quantity of pills and other drugs down his throat during an FBI raid.

Juice WRLD died suddenly on December 8th on the tarmac of Chicago’s Midway Airport in his private jet. Federal law enforcement officials from the FBI and FAA raided the jet after a tip from the pilot of the plane.

In a panic, Juice WRLD, aka Jarad Higgins, ingested a massive amount of pills and other drugs to hide them from the authorities. Initially, the raid targeted members of Higgins’ security detail, who were reportedly carrying guns. A massive amount of marijuana was also found on the plane.

The Cook County Medical Examiner’s Office confirmed the cause of death in a statement shared earlier today.

“The Medical Examiner’s Office has determined the cause and manner of death of 21-year-old Jarad A. Higgins. Higgins died as a result of oxycodone and codeine toxicity,” the statement read.  “The manner of death is accident.”

Whether Juice WRLD’s death is properly viewed as an ‘accident’ is debatable.  The rapper knowingly ingested a massive stash of drugs, which is completely different than a truly accidental death.

The situation leading up to Juice WRLD’s death started when the rapper’s plane was en route to Chicago.  It was then that the plane’s pilot noticed that some of the people on the flight were carrying weapons, and he notified the FAA. Because of this, the plane was met on the ground by both FAA and FBI agents, who were there to search for both the guns and the people carrying them.

Whether a massive raid involving numerous federal agents was warranted is a question worth asking. Juice WRLD’s bodyguards were armed for a reason, and they ended up getting charged with various misdemeanors. While Higgins shouldn’t have consumed such a large amount of drugs, it’s not a complete stretch to blame the death on a massive, expensive law enforcement raid that was ultimately unnecessary.

The ’emo-screamo’ band alleges that Juice WRLD’s smash hit, ‘Lucid Dreams,’ copied Yellowcard’s “Holly Wood Died.” The lawsuit was filed prior to the rapper’s shocking death, though the band decided to continue with the action. Proceedings will continue in February; so far, no members of Juice WRLD’s family have responded to the legal complaint.