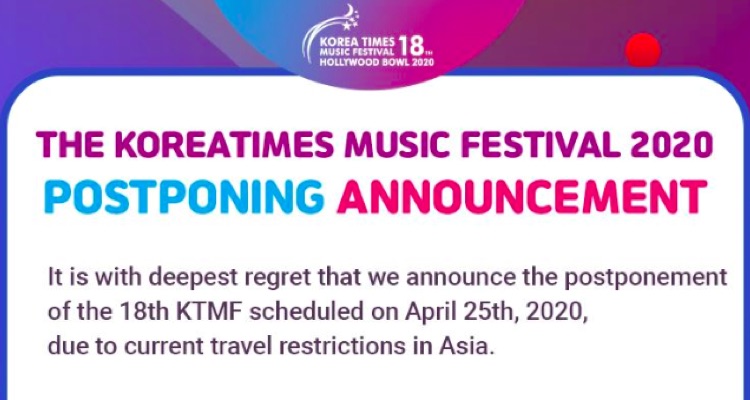 The 18th annual Korea Times Music Festival was scheduled to take place on April 25th, but due to “current travel restrictions in Asia,” the festival has been postponed indefinitely, according to organizers. Ticketholders can request a refund or hold onto their passes to be admitted when KTMF eventually takes place.

57 Americans, including eight California residents, have been diagnosed with the coronavirus (officially referred to as COVID-19); each of these individuals had been traveling abroad and is being treated in isolation, per Center for Disease Control (CDC) guidelines. Late last night, San Francisco Mayor London Breed declared a state of emergency in order to better respond to the epidemic.

The first cases of the coronavirus appeared in China’s Wuhan late last year. Experts believe that the Chinese government failed to note the disease’s danger and high risk of infection in an effort to keep citizens calm, before quarantining Wuhan when a series of new COVID-19 cases came to light. Many Chinese medical facilities are struggling to provide adequate treatment.

As the KTMF’s name suggests, most of its artists and special guests hail from South Korea; last year, boy band Super Junior, internet mogul and billionaire Kim Beom-soo, and comedian Kim Young-chul took the stage, among many others. The bill is heavily geared towards K-pop, though the event is a broader celebration of Korean music and entertainment culture.

1,261 South Korean residents have been diagnosed with the coronavirus to date, and double-digit infections have been reported for each of the last seven days.

Additionally, it was revealed this morning that a U.S. soldier stationed in South Korea has come down with the disease. 16 total countries, including Japan, Vietnam, and Singapore, have instituted travel restrictions with South Korea.

The KTMF isn’t alone in taking precautions to avoid the coronavirus. Earlier this month, British rapper Stormzy cancelled his scheduled Asian tour dates, and both Sony and Amazon backed out of Barcelona’s Mobile World Congress. The event itself was ultimately canceled.

Like 2002’s SARS, which also originated in China, COVID-19 is proving difficult for experts to treat. However, despite spreading to countries around the globe, SARS was eventually contained—partially because infection rates dropped substantially when the winter weather broke.