Spotify Is Targeting Superfans to Bolster Its Artist-Driven Radio Stations 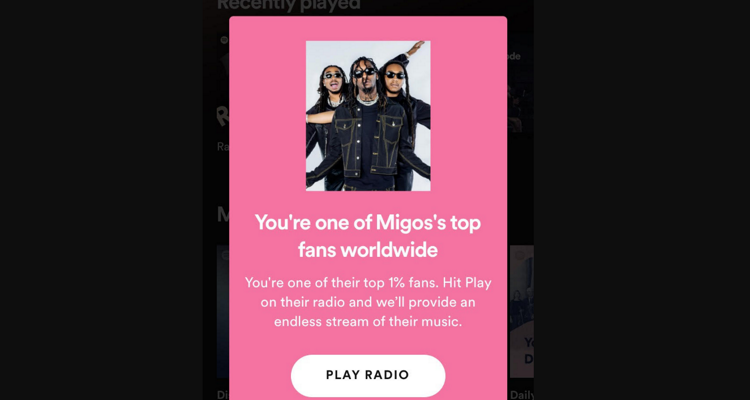 Spotify is turning to superfans to share the word about its artist-driven radio stations.

Fans began receiving messages saying they are in the top percentage of fans of specific artists. While most notifications sent out told fans they were in the ‘top 1% of fans,’ not all notifications were so specific.

Some of the known artists targeted this way include Kendrick Lamar, Ghost, the Doors, Migos, the Barenaked Ladies, and many more.

Fans reacted to the notification the way Spotify hoped – many shared the news with their followers on social media. Spotify has declined to provide any information about how well received the notifications were among fans. We have no data on how the percentages were calculated, or what it means to be in the top 1% of fans.

Instead, Spotify spokesperson Peter Collins said the notifications are a test and not indicative of any new features.

Spotify is sitting on a massive mountain of data. The Spotify Wrapped campaign has given users a preview of their yearly Spotify history every year since 2010. But notifications like these to Spotify fans about artist stations are less clear in their purpose for listeners.

Some fans are displeased with how Spotify’s random data metrics seem to reduce music listening to a stat.

If Spotify can deduce that listeners are in a percentile of fandom, how do they do that? Is it the number of streams? We already know those can be bought and paid for by artists exploiting Spotify’s algorithms. The data Spotify collects is anonymous, but it may help paint a profile of who is listening.