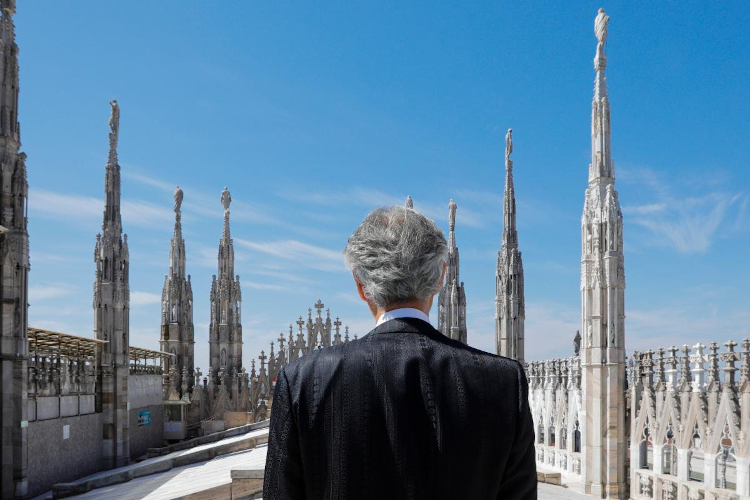 Universal Music Group (UMG) has revealed that the moving “Music for Hope” performance Andrea Bocelli delivered from the Milan Cathedral was the most-watched classical music livestream in YouTube history.

Approximately 2.8 million concurrent viewers enjoyed the Easter Sunday concert as it occurred live. Including replays, the half-hour opera set garnered over 28 million views in its first 24 hours on YouTube. At the time of this writing, “Music for Hope,” which is available exclusively on YouTube, had been viewed more than 35.5 million times.

On the heels of Andrea Bocelli’s smashing success, PBS announced that it will air replays of “Music for Hope” this week. Entitled Andrea Bocelli: Music for Hope, A Great Performances Special, the television event will also plug Bocelli’s namesake charitable foundation, which is raising money for COVID-19 relief presently.

Besides lifting the spirits of many who are overcoming the coronavirus pandemic, Bocelli’s performance was symbolic of Italy’s fight against the virus. Milan, where Andrea executed his five-work setlist, is the capital of Lombardy, the Italian region that’s been hit hardest by COVID-19.

To date, Italy has reported more than 165,000 COVID-19 infections, as well as approximately 22,000 deaths. The latter figure is the highest of any European nation, and is second on the global stage only to the United States. However, some countries’ coronavirus infection and death statistics are facing increasing scrutiny.

Other music industry artists, companies, and organizations are also stepping up to support those suffering amid the coronavirus pandemic. Yesterday, Digital Music News was the first to report that Record Store Day UK organizers had debuted the “Fill the Gap” initiative, which encourages vinyl fans to fill the gap in their record collections by purchasing from independent record stores.

And a few days before that, Rihanna and Jack Dorsey donated $4.2 million to combat domestic violence, which some reports indicate is on the rise because of stay-at-home and shelter-in-place orders.