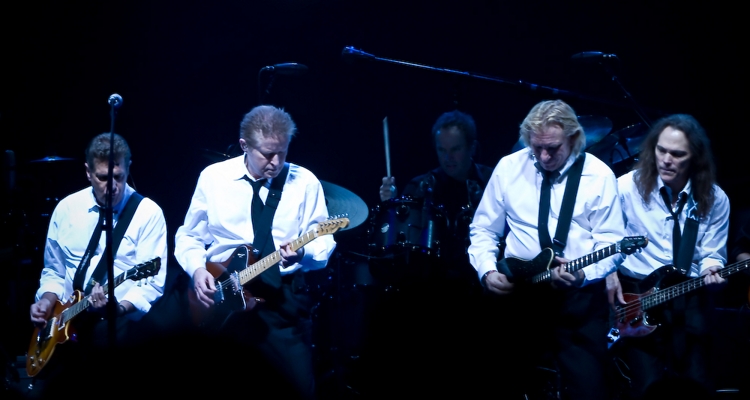 The Eagles’ ‘Hotel California’ Tour has been rescheduled for the second time – it’s now happening in the fall of 2021.

The ‘Hotel California’ tour was supposed to start this spring, but the coronavirus pandemic stopped that. The show was then moved to this fall, but the second postponement moves the tour to next year.

The ‘Hotel California’ tour double postponement is another signal that live events won’t return in 2020. Accordingly, many artists and promoters are looking at the summer and fall of 2021 as safe re-bookings. The Eagles trek will now pick up in Denver starting September 16th, 2021. Representatives for The Eagles told fans to hold their tickets, but that refunds are available.

The tour saw the band playing the Hotel California album with an orchestra and choir. The show first premiered at the MGM Grand Garden Arena in 2019 before going on tour in February. The group was forced to cancel its Houston gigs, however, as the coronavirus shutdown expanded across the United States.

The Eagles postponed the rest of the tour into September and October of this year. But those dates are now out as well, as the Hotel California tour is hoping for better times in 2021.

Earlier, California Governor Gavin Newsom said live events would be the last to return to normalcy in the state. In the state’s recovery plan, events are listed in the fourth and final phase of re-opening. That’s contrary to Missouri, where live events and concerts are re-opening today with social distancing guidelines in place.

Newsom says the fourth phase can only occur when a vaccine or mass immunity is in place. The time table for both of those events pushes fall concerts further back. The new line-up for The Eagles will kick-off in Denver before traveling to Dallas, Phoenix, St. Paul, Los Angeles, and ending in San Francisco.

Suddenly, Taylor Swift and Justin Bieber’s 2020 cancellations look wise, while previously-rescheduled events like Coachella now in jeopardy of getting pushed into 2021.