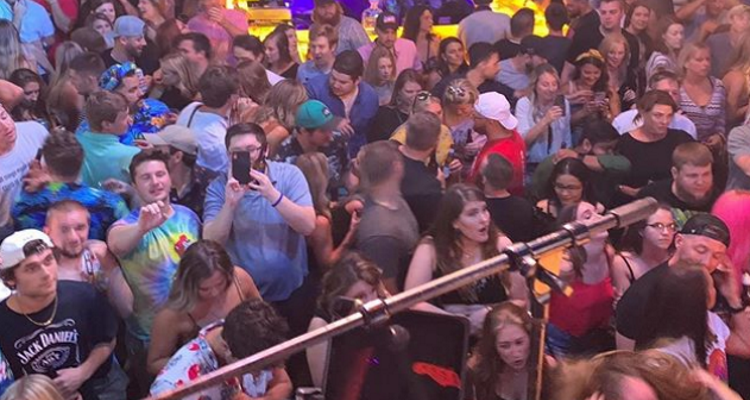 The Metropolitan Beer Permit Board issued the permit suspension after images of a packed bar appeared on Instagram. Other restaurants in the Nashville area that also received suspensions include Broadway Brewhouse and Nudie’s Honky Tonk.

“They were in violation of two points of the order that states bar areas must remain closed to the public,” an inspector confirms. “No interaction with the public is allowed, and alcohol can only be served at tables and booths.

It was the first of more than a dozen bars and restaurants cited for not following reopening procedures. Right now, an active public health emergency order bans anyone in Davidson County from being seated or served at a public bar. Phase three of the reopening is slated to begin Monday, but many bars opened ahead of that date.

The maximum civil penalty for a first offense of violating a public health order is $1,000. Bar owners say they will seek a reduction of the fine through appeal. Any cited businesses have fourteen days to appeal to the courts.

The owner of the bar, Steve Smith, says he believes the reopening order makes no sense.

But images of the bar’s reopening show a packed crowd with no social distancing. Patrons are dancing on the floor close together, and alcohol is clearly being served to them. “The Nashville government is, like, communist. They’ve got us behind a Berlin Wall,” Smith is quoted in The Tennessean. “They’re doing everything they can to put us out of business.”

The state of Tennessee is currently moving through four phases of reopening its businesses to the public. Bonnaroo was postponed to September because of the COVID-19 outbreak.