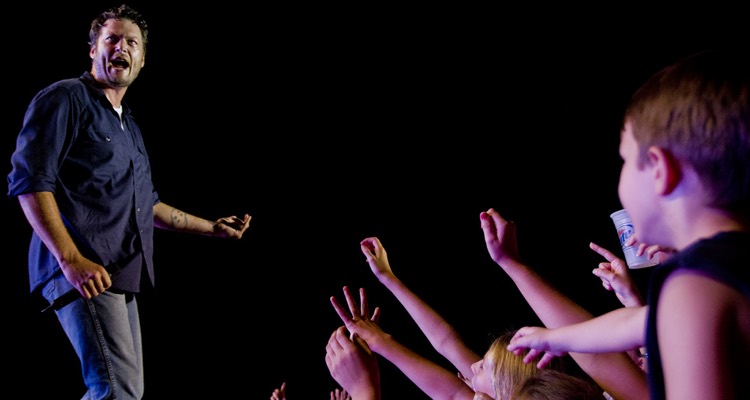 With most traditional concerts still on hold due to health concerns stemming from the novel coronavirus, a growing number of artists are booking drive-in performances to safely entertain fans.

In May, shortly after drive-in concerts began to pick up steam in Europe, YouTuber Marc Rebillet unveiled America’s first drive-in tour. Country music mainstay Garth Brooks then rallied behind the idea of a socially distanced audience, offering a one-night-only concert at 300 drive-ins across North America. Additionally, Live Nation’s “Live from the Drive-In” series is set to kick off tomorrow, while Walmart plans to convert 160 of its parking lots into drive-in theaters (in partnership with Tribeca Enterprises) later this summer.

Now, country stars Trace Adkins and Blake Shelton, as well as Shelton’s Grammy-winning partner, Gwen Stefani, are preparing to release a drive-in concert of their own. Under the “Drive-In Encore Nights” banner, the specially recorded performance will stream at drive-ins across the U.S. and Canada – not unlike Garth Brooks’s once-off drive-in special, which Encore Live also promoted.

To be sure, the Fort Worth-based brand indicated that the “overwhelming response to Garth Brooks’ drive-in concert feature” prompted it to book Shelton, Stefani, and Adkins and roll out the Drive-In Encore Nights series. Subsequent iterations (involving different artists) are in the works presently, and details will be provided sometime later this month.

Tickets for Shelton’s July 25th gig are slated to become available for purchase on Tuesday, July 14th, at noon local time. Costing $114.99 plus fees, each pass will cover one vehicle with as many as six passengers (though it bears mentioning that cars cannot contain more guests than seatbelts). A multitude of drive-in theaters are expected to host the show, and additional venues will be announced throughout the week, per the organizers.

Predictably, participating drive-in theaters will implement an array of social distancing measures and safety precautions at the shows, including spacing guests’ vehicles apart, equipping staff with protective equipment, and ensuring that attendees remain near those who they arrived with.

Addressing his much-anticipated drive-in concert in a statement, Blake Shelton said: “This is such a great way to enjoy music with your family and friends and stay safe. I’m excited we’re getting the chance to perform a concert for fans and we’re going to go back and play old hits like “Austin,” newer songs like “God’s Country,” and we might even introduce something brand new! So fill up those popcorn tubs and get ready for some country music!”