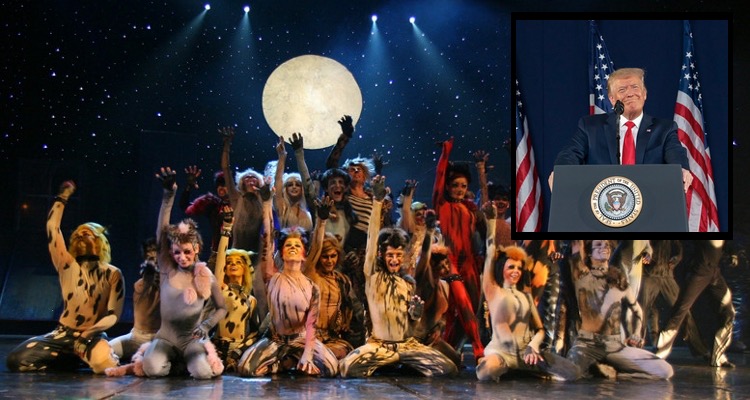 His team has sent the Trump 2020 campaign a cease-and-desist letter over the song, “Memory.” The message was sent by the composer’s UK-based company, Really Useful Group, according to reports. After ‘Cats’ star Betty Buckley urged the composer to speak out against the use of the song, the message was promptly sent out.

It’s not clear how many times the Trump campaign has used “Memory,” though the song seems to reappear periodically.  The song is often part of a rotation that leans heavily on tracks by Tom Petty, the Rolling Stones, Neil Young, and Lee Greenwood, among many others.

Buckley and Andrew Lloyd Webber are the latest artists demanding that their music be removed from Trump rallies.

Last month, Trump made headlines when he played the Rolling Stones and Tom Petty at his ill-attended Tulsa rally. The Tom Petty estate sent a cease-and-desist letter and asked that Trump refrain from using any of Tom Petty’s music. The Rolling Stones even teamed up with legal help from ASCAP and BMI to threaten Trump’s continued use of their music.

“BMI has notified the Trump campaign on behalf of the Stones that the unauthorized use of their songs will constitute a breach of its licensing agreement,” the Stones’ legal team said. “If Donald Trump disregards the exclusion and persists, then he would face a lawsuit for breaking the embargo and playing music that has not been licensed.”

BMI’s political clause says specific works may be excluded from a music license for political entities if a songwriter or publisher objects. That’s why you see so many composers, singers, and songwriters publicly speaking out about their music appearing at Trump rallies.

Neil Young has also lashed out at Trump for playing his music at rallies. “Rockin’ in the Free World” often appears at Trump rallies against the singer’s wishes. The next step would be legal action, though there’s little legal precedent in this area.

ASCAP’s legal team says the more closely a song is tied to a campaign message, the more convincingly an artist could object. Separately, artists who publicly complain about the continued use of their music could factor into any future legal action. Several artists have threatened to sue Trump over the use of their music, but none have yet.