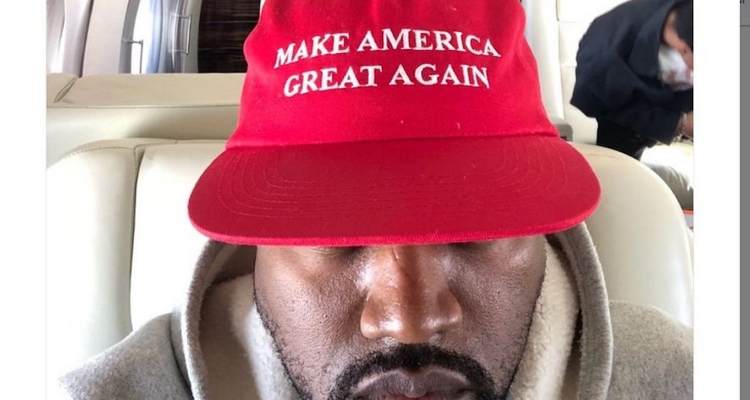 Kanye West has a new album coming out, which means it’s time for an ‘off-his-meds’ publicity stunt. This time the rapper is stirring up controversy with an ill-timed presidential campaign.

The rapper held a rally in South Carolina on Sunday to drum up enough signatures to appear on the ballot. During that rally, he made emotional comments about abortion and revealed that he thinks Kim may divorce him.  He also claimed that Harriet Tubman didn’t really free any slaves.  It’s all classic Kanye insanity, though now the end goal of the meltdown is coming into focus.

During his on-stage rant, Kanye described how he and Kim discussed the possibility of abortion while she was pregnant with North. The outrageous over-sharing and resulting drama was quickly picked up by media sources. “Kanye isn’t in a good place and isn’t listening to anyone trying to talk him into getting help,” a ‘source’ spilled to ET.  “Kim is upset with Kanye for his rants yesterday, especially talking about the possibility of having an abortion and not giving birth to North. She knows this is something North will see when she gets older, and that’s heartbreaking.”

“At the end of the day, people close to Kanye want him to end this presidential campaign now before he does more damage to himself, his brand, and the family,” the source continues.

“Harriet Tubman never actually freed the slaves, she just had the slaves go work for other white people,” West lauded in front of an incredulous audience. But other artists in the hip-hop community aren’t buying that revisionist version of history. John Legend posted a tweet with Tubman, calling her a superhero and a ‘founding mother.’ Other high-profile entertainers also weighed in, including both T.I. and 50 Cent.

Right now, the Kanye West presidential ‘campaign’ looks increasingly like a farce. His campaign strategist in Florida confirmed he’s out in that state. He also missed the deadline to file paperwork to appear on the ballot in Michigan in November. He needed 10,000 signatures in South Carolina by this morning to appear on the ballot.

The presidential campaign stunt is for a new album called DONDA – named after his late mother, Donda West.

It all looks like another shameful publicity ploy. And for those lamenting about a mental breakdown, remember: Kanye is the wealthiest musician in the world — so there’s likely a method to the madness. There’s also the theory that Kanye is simply indulging in performance art, with the world interpreting the fabricated madness as reality.

The album was initially slated to drop on July 24th, and Kanye revealed the tracklist for the album. It will feature the single, “Wash Us In The Blood.” West has since deleted that tweet, which happened before his disastrous (or intentional) South Carolina rally appearance.

So expect the album to drop within the next few months? It’s coming. Kanye wouldn’t be going crazy if it wasn’t.