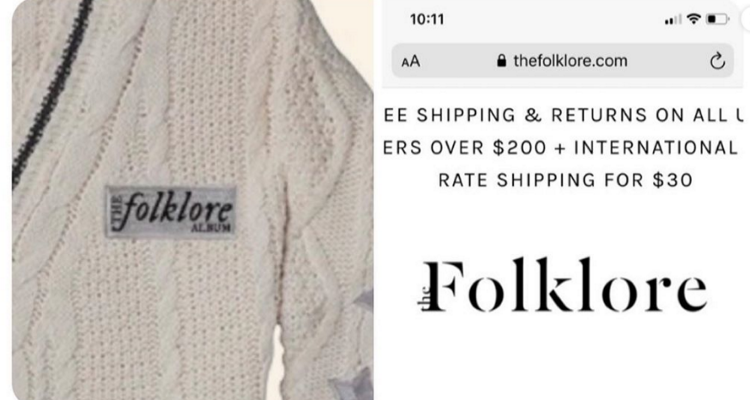 Taylor Swift is removing and rebranding some of her folklore album merchandise after rip-off callouts emerged.

Amira Rasool, the founder of the online retailer The Folklore, tweeted about the similarities last week. She accuses the pop icon of selling merchandise that rips off the logo of her apparel store, and ripping off a black-owned business.  “Wait hold up,” Rasool stated. “Taylor Swift, it’s one thing to use the name ‘Folklore’ but we’re out here stealing Black women’s logos too?”

Rasool shared multiple photos of the product lines on Twitter, highlighting the similarities. “Based on the similarities of the design, I believe the designer of the merch ripped off my company’s logo,” she tweeted on July 24th. “I am sharing my story to bring light to the trend of large companies/celebrities copying small minority-owned business owners’ work. I am not going to let this blatant theft go unchecked.”

After the accusations aired, the offending folklore merchandise quickly disappeared from Swift’s website. The original designs featuring a logo with “The Folklore Album” were replaced with a new logo that reads “Folklore Album.”

Rasool confirmed she was in contact with Swift’s legal team about the issue. “I commend Taylor’s team for recognizing the damage the merchandise caused to my company @TheFolklore’s brand,” she continues on Twitter. “I recognize that she has been a strong advocate for women protecting their creative rights, so it was good to see her team is on the same page.”

Swift’s very public break-up with her label is what Rasool is referring to in her statement.

Swift’s seventh studio album ‘folklore‘ is the first album to which she owns her masters. A highly publicized fight between Swift and Scooter Braun last year made headlines. The pair recently released an album with some of her earlier songs, which drew criticism from the singer.

“In my opinion… Just another case of shameless greed in the time of Coronavirus. So tasteless, but very transparent,” Swift wrote to her fans on Instagram. Scooter Braun purchased Big Machine Label Group for more than $300 million in June 2019; Swift took to Tumblr in a fiery rebuke of the purchase after she learned of the deal.

“Some fun facts about today’s news: I learned about Scooter Braun’s purchase of my masters as it was announced to the world. All I could think about was the incessant, manipulative bullying I’ve received at his hands for years,” Swift wrote on her blog. “This is my worst-case scenario. This is what happens when you sign a deal at fifteen to someone for whom the term ‘loyalty’ is clearly just a contractual concept.”

Swift celebrated the surprise release of her folklore album earlier this month. But the merchandise dust-up isn’t the only criticism the album has received. She’s accused of lifting the album’s design from Ihsahn, a Norweigan black metal musician. Swift hasn’t responded to the album cover accusations, however.