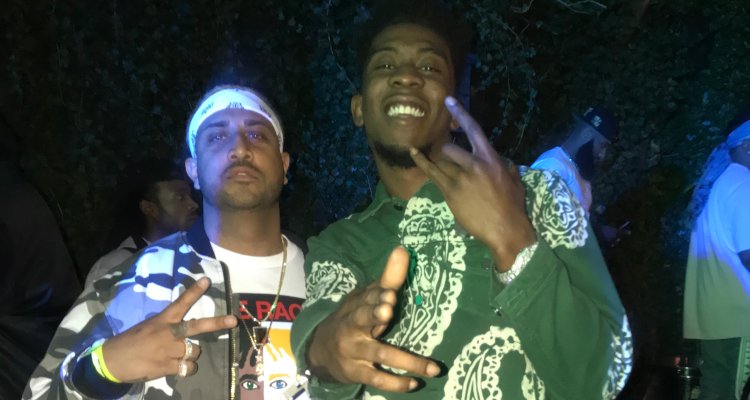 Last week, we reported on the considerable controversy that followed Boosie Badazz’s opting to host a packed pool party amid the COVID-19 pandemic. Now, some fans are criticizing rapper Desiigner for calling the novel coronavirus “B.S.” and encouraging others to “enjoy life.”

Desiigner recently offered the contentious take on his Instagram Story, and multiple persons captured and shared the footage. Recording the selfie video outside, with an occupied swimming pool prominently displayed in the background, the 23-year-old stated off the bat: “Bro, no funny, corona is fake gone, bro, no funny shit. … Enjoy life. No cap. We ain’t even on that type of vibe.

“Honestly, that corona shit is B.S. … I didn’t get sick yet. I’ve been outside healthy. Yes, sir,” continued the Brooklyn native, panning to the side and showing what appeared to be some sort of lit cigarette in his right hand. “Give me a smoothie, give me a smoothie,” Desiigner said to close the clip.

Predictably, fan responses to the video and the underlying message – which seem to represent something of a departure from the pandemic-inspired “Survivor” track that Desiigner released in April, including a music video in which he donned a mask – have been predominantly negative.

“He mistook rona [the coronavirus] for his career cos thats the only thing finished wear your masks y’al (sic),” slammed one Instagram user.

“What an ignorant and insensitive thing to say when there’s literally people fighting for their life due to COVID-19 right now,” wrote another individual.

“What was the name of his hit again? Being serious,” penned a third aggravated fan, likely referring to Desiigner’s most popular song to date, 2015’s “Panda.”

A small portion of commenters suggested that Desiigner may have been joking – he hadn’t elaborated on his intent or the controversy at the time of this writing – and a larger number of persons yet relayed the opinion that Desiigner’s attire and appearance resembled those of NBA veteran Iman Shumpert. Shumpert is married to singer-songwriter Teyana Taylor.

“At first I thought this was teyana Taylor [‘s] husband lol,” echoed a different commenter.

Though Desiigner was with only a handful of friends in the video (and was not personally violating social distancing guidelines), we’ve reported on a multitude of jam-packed gatherings and concerts as of late. Besides Boosie Badazz’s aforementioned pool party, The Chainsmokers’ hosted a Hamptons drive-in concert that appeared to become a traditional crowd-based performance by the end of the night. After viewing footage of the gig, an “appalled” Governor Cuomo ordered the New York Department of Health to conduct a comprehensive investigation.

And last Saturday, a large group of rave-minded New Yorkers assembled beneath the Kosciuszko Bridge, dancing and socializing until the early hours of the morning on Sunday.