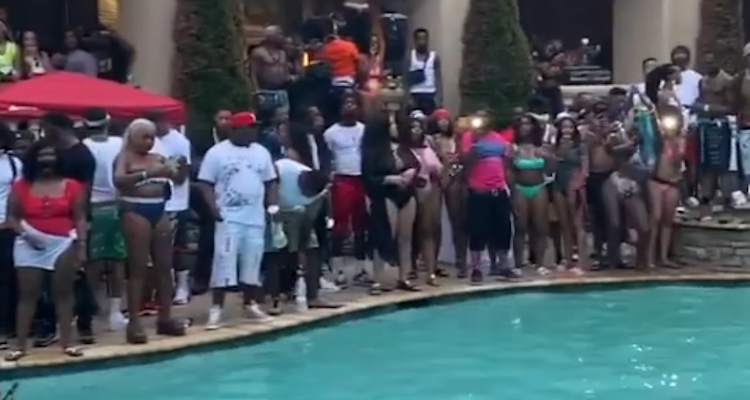 Some of the many fans who attended Boosie Badazz’s pool party over the weekend.

Over the weekend, rapper Boosie Badazz threw a packed pool party despite the ongoing COVID-19 pandemic, and some are unhappy with the decision.

Footage of the non-socially distanced happening recently began circulating on social media. And given that these clips show a number of attendees recording on their phones, it’s safe to say that additional video is forthcoming. However, the currently available daytime shots show a massive crowd standing (not sitting) around the Baton Rouge, Louisiana-born artist’s pool, though only a small portion of individuals opted to take a dip. With his security team at his side, Boosie Badazz used a microphone to interact with and excite the guests, whose cheers occasionally made it difficult to hear what he was saying.

Other video reveals that the scene became a bit wilder by nightfall, with more people swimming, dancing, and closely interacting. It appears that few partiers decided to wear masks during the event’s daytime element, and facial protection seems to have been scarcer yet throughout the evening. It’s unclear when exactly the hours-long party drew to a close.

On social media, fans are levying coronavirus-related criticism against Boosie Badazz and the many people who enjoyed the pool party.

“Not the brightest bulb in the box,” insulted one Twitter user, responding to a post about the mansion gathering.

“This is why we’re gonna be in quarantine till 2021,” indicated a peeved commenter.

“Boosie is ignorant af, but we’ve known this,” penned a third critic.

Admittedly, different fans are rallying behind Boosie Badazz – or, at the very least, deflecting the pushback he’s receiving.

“The whole world isn’t taking it seriously, I don’t get why he’s getting backlash tbh,” opined a supportive individual.

At the time of this writing, Boosie Badazz hadn’t officially responded to the outcry stemming from his pool party. But it doesn’t appear that the 37-year-old is especially concerned with the complaints, as he’s promoted an advert for a second pool party that he is scheduled to host on Saturday, August 8th.

In recent days, several artists have made headlines for their non-socially distanced performances. Earlier today, we reported that an “appalled” Governor Cuomo had ordered the NY Department of Health to investigate a Chainsmokers charity concert that took place in the Hamptons. (It bears mentioning that the gig was billed as and intended to be a drive-in show.) Additionally, DJ Kaskade faced criticism over an alleged boat-party concert, though Boosie Badazz’s larger celebration has drowned out much of the controversy.

More broadly, illegal concerts and gatherings have become increasingly prevalent as of late. One week back, we covered a sizable rave in England – the newest in a series of free electronic music sets – that raged on for half a day, to the dismay of sleep-deprived nearby residents.