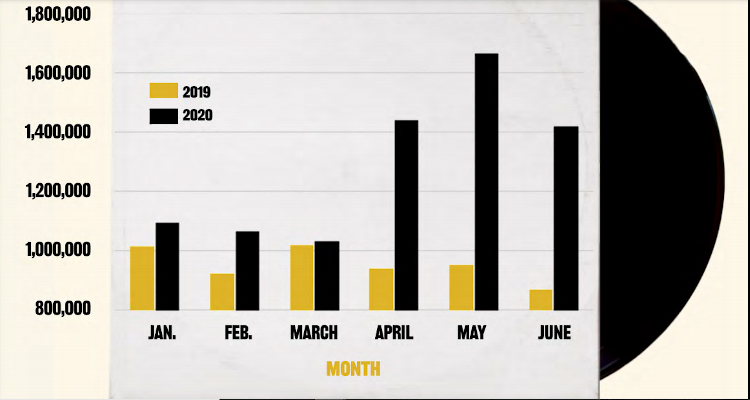 A bar-graph comparison of physical sales on the Discogs Marketplace in 2019 and 2020. Photo Credit: Discogs

Last month, Digital Music News was first to report that vinyl had thrived through 2020’s initial six months in spite of the novel coronavirus pandemic. Now, Discogs has elaborated upon the medium’s continued growth in its own half-year analysis.

Discogs compiled its Q1 and Q2 2020 Marketplace data in a comprehensive report, which was shared with DMN. The Portland, Oregon-based platform enjoyed solid year-over-year sales growth during January and February; purchase volume then stagnated in March, amid the domestic onset of the COVID-19 crisis and its associated market shakeup.

April, May, and June, however, brought with them tremendous transaction upticks, including over 1.6 million sold items in May alone (up from approximately 950,000 in May of 2019).

Overall Discogs Marketplace physical sales jumped 29.69 percent through the first half of 2020, compared to January-June 2019 – a point that the mid-year analysis attributes, in part, to a larger number of users and “a desire to support small business.” Within this nearly 30 percent boost, CD sales’ year-over-year growth came in at 31.03 percent, and cassettes trailed closely with their 30.52 percent increase.

Nevertheless, vinyl and its already-substantial sales witnessed the biggest year-over-year improvement, 33.72 percent. Equally as significant, vinyl sales accounted for more than 75 percent of Discogs’ total transactions between January and June 2020.

Indie record shops’ pivoting to digital played an integral role in the latter sales boom, according to Discogs – including “many record stores listing their entire stock online.” The decision to embrace remote selling was, admittedly, the result of circumstance, as lockdown measures temporarily prevented brick-and-mortar shops around the world from resuming normal operations. But the necessity-prompted move may well have a lasting positive influence on the vinyl sphere as passionate fans continue to interact on the web.

“From where we’re sitting right now,” the report reads, “the future of the record industry looks different, but it certainly looks quite bright.”

On the new-release front, Tame Impala’s The Slow Rush (which became available for purchase in February) sold the most of any debuting vinyl record on the Discogs Marketplace. The Strokes’ The New Abnormal followed, while Khruangbin and Leon Bridges’ Texas Sun EP rounded out the top three.

About one month ago, we covered Citizen Vinyl’s fast-approaching opening. Spanning 10,000 square feet, the Asheville, North Carolina, business will encompass a record store, a recording studio, and even a bar/café. And in a testament to the ongoing resurgence and bright future of vinyl (which has experienced 14 consecutive years of growth in the U.S.), the ambitious establishment will also house the first record-pressing factory in The Tar Heel State.

Citizen Vinyl is set to begin welcoming customers in mid-September.