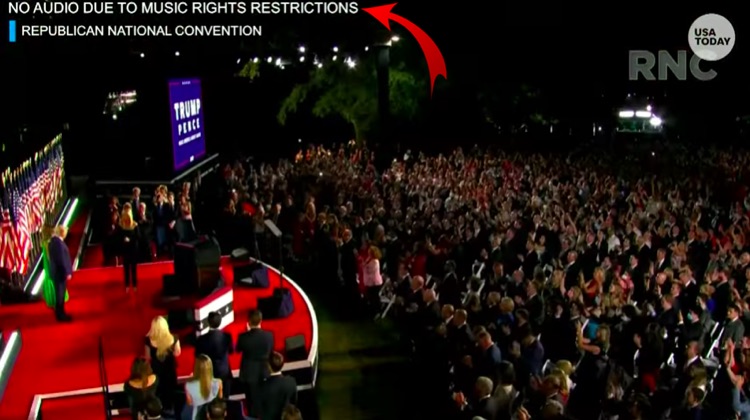 A muted video of Donald Trump’s acceptance speech at the Republican National Convention appearing on YouTube on Friday, August 28th.

It’s unclear why YouTube blocked the speech, or how long the block lasted. After Digital Music News noticed the muted video on Friday, YouTube appeared to have restored the audio over the weekend.  Neither YouTube, the Republican Party, or any rights owners have publicly commented on the unexpected move.

One quick explanation for the block: the Republican National Convention simply played a song it wasn’t authorized to play. That would have quickly triggered YouTube’s Content ID copyright claiming system, which either automatically blocks the performance of unauthorized works, or gives rights owners the choice to block, monetize, or permit the usage.

But digging a bit deeper, that explanation seems unlikely.

Once the audio for the video was restored, it was revealed that Donald Trump’s intro music was Lee Greenwood’s patriotic anthem, “God Bless the U.S.A.”  That song is played at virtually every Trump political speech, and is typically played multiple times (at the beginning and end) of Trump rallies.

All of Trump’s political events are typically live-streamed or uploaded onto YouTube. In that light, it seems highly unlikely that Lee Greenwood, or any other rights owner associated with “God Bless the U.S.A.,” would issue a claim for the speech be muted. According to allmusic.com, Lee Greenwood is the only listed composer and performer of the piece, which was first released in 1984.

Separately, Trump has drawn the repeated ire of superstar musicians for his rally setlists.

That includes the Rolling Stones, Elton John, Tom Petty, Neil Young, and even Andrew Lloyd Weber (yes, Trump played the Cats theme at a recent rally).  Young has even filed a lawsuit against Trump to force the President to stop playing his music at his political events.

Whether Young will prevail is a big question, however. The reason is that U.S. Copyright Law typically protects public performances of a vast range of works, as long as the proper performance rights organization (PRO) licenses are secured (typically by the venue, not the Trump campaign).  That means that Trump has a pretty strong initial line of defense against Young’s suit, though Young could pursue alternative legal attacks based on likeness and the violation of exclusionary clauses for political events.

Just recently, both ASCAP and BMI demanded that Trump stop playing the music of the Rolling Stones based on these exclusionary clauses. But despite the threatening cease-and-desists, there’s no legal precedent enforcing those exclusions.