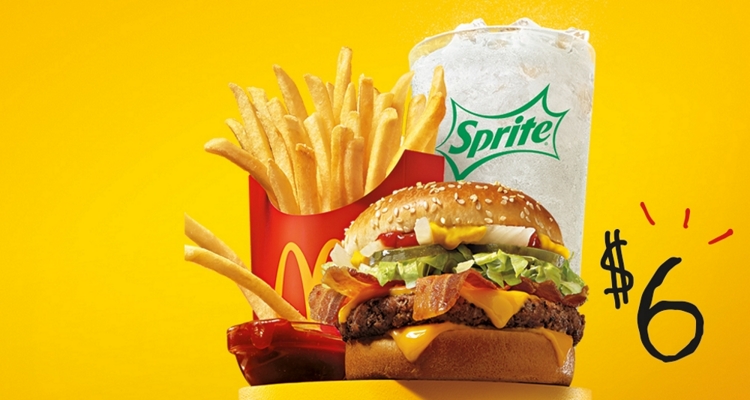 Starting Tuesday and running until October 4th, McDonald’s will offer the $6 meal promotion. The Travis Scott Meal includes a quarter-pounder with cheese, bacon, and lettuce. It also features a medium order of fries with BBQ sauce for dipping and a large Sprite.

McDonald’s Chief Marketing Officer says the idea is to promote Travis’ favorite meal to fans. “Travis is a true McDonald’s fan having grown up visiting our restaurants in Houston, not to mention one of the biggest musical and cultural icons in the world.”

Scott is well-known for embracing new methods of promoting his music.

Back in April, Travis Scott partnered with Fortnite creator Epic Games for a huge in-game concert. The concert was a surreal experience, featuring a rocket launch and a mech vs. kaiju battle. During the opening song of the concert, a giant Scott stomped around the island. As the tracks in the game changed, so did the visuals on the island.

“The set was short, lasting around 15 minutes,” one fan wrote. “But what I loved was that it was the kind of experience that could only exist in a virtual space like this.” Travis Scott is well-known for throwing an amazing live performance. But nothing can top what he achieved as a Rap God walking among his fans through Fortnite.

The Travis Scott concert in-game was a series of concerts for attendees, helping expose the broader player base to the event. More than 12 million concurrent players tuned in to watch Scott’s concerts. Millions more tuned in to watch a video of the performance on Twitch and YouTube.

Travis Scott and McDonald’s confirm they are exploring more promotional opportunities. “I couldn’t be more excited to bring the Cactus Jack x McDonald’s collaboration to life,” Scott says. “We are bringing together two iconic worlds. Including a charitable component was key for me, and I can’t wait for people to see what we have in store.”

Scott also designed custom apparel for McDonald’s, part of the broader partnership. Throughout, Scott appears to be embracing the Supreme ideal that scarcity creates interest with these promotions. Undoubtedly there will be plenty of people interested in trying their favorite rapper’s meal as they listen to his latest album.