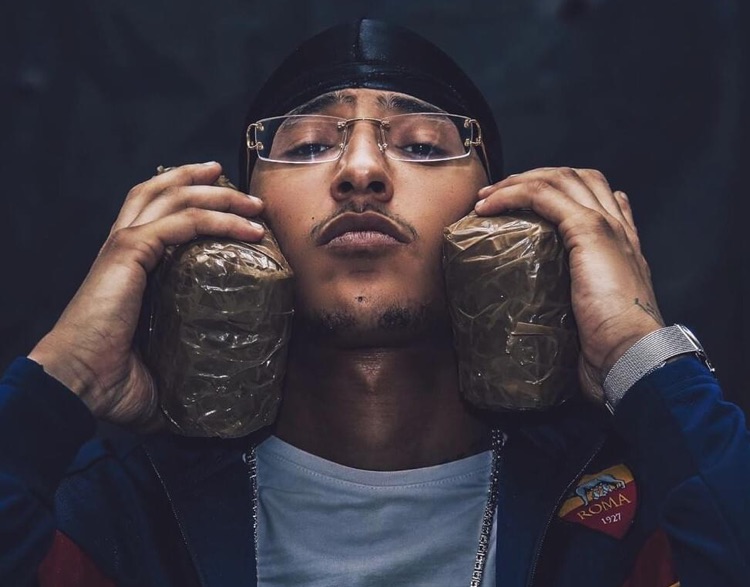 Rapper Freeze Corleone, who was recently dropped by Universal Music Group over his anti-Semitic lyrics.

Spotify has removed dozens of podcasts carrying controversial content — including a number of Joe Rogan’s earlier episodes. Spotify employees have even threatened to strike if not given direct editorial oversight over Rogan’s future interviews.  So why is Spotify refusing to remove Freeze Corleone — a rapper who repeatedly praises Hitler and the Third Reich?

Freeze Corleone is an independent rapper — but not by choice. Just last month, the French artist was dropped by Universal Music Group because of his heavily anti-Semitic lyrics. UMG severed ties with the rapper after his latest release, LMF. “The release of the album has revealed and amplified unacceptable racist statements,” Universal stated.

Aside from being roundly condemned by Jewish advocacy groups, Freeze Corleone is also under investigation by French authorities for lyrics like these: “I arrive determined like Adolf in the 30s”; and “Build an empire like young Adolf, determined with great ambitions like young Adolf.”

Freeze Corleone is also a Holocaust denier. Yet Spotify has refused to remove the rapper, despite obvious issues pertaining to racial hatred and conspiracy theories. Even more concerning, the platform is actively promoting the rapper by placing his songs within multiple highly-trafficked playlists, some of which require direct editorial review by a Spotify employee. Collectively, these playlists have millions of listeners, and several of Freeze Corleone’s tracks have millions of plays.

Since first raising this issue, we’ve been unable to get any response from Spotify. Others have also been getting ignored, including Jewish advocacy groups like the Simon Wiesenthal Center. Despite an open letter imploring Spotify CEO Daniel Ek to address this issue, the group has told DMN that they’ve yet to receive any response.

Now, a Digital Music News reader and Spotify subscriber decided to ask Spotify again — this time by trying customer service. That’s when the company’s stance on the matter emerged.

“After seeing your article, I decided to contact Spotify for myself and see how they respond,” the reader — who asked not to be identified — told us.  “My original message to them was, ‘can you please remove the antisemitic lyrics from rapper Freeze Corleone?”

Here’s how the conversation went.

Spotify (John S.): I understand that you have some concerns with a song’s contents. I’ll look into that for you.

Subscriber: Will you please. It wouldn’t make a dent in the scale of Spotify, but it’s devastatingly hateful and sadly influential to many.

Spotify: I understand where you’re coming from. May I ask if you’re referring to a specific song or a playlist?

Subscriber: Well it’s not any particular song. It’s well spread though all the content. If you listen to some [I’m] sure you find something.

Subscriber: There are articles online that speak of it. “Freeze Corleone antisemitic lyrics”. You know.

Spotify: We make music available as the artist intends it to be heard, and that sometimes includes explicit content. Based on the information they provide, we tag explicit releases with EXPLICIT or E.

The activist group has reportedly demanded action against Rogan for expressing views deemed to be transphobic. That includes a recent episode with Abigail Shrier, author of Irreversible Damage: The Transgender Craze Seducing Our Daughters. In the interview, Shrier strongly questioned why teenage girls are undergoing irreversible transgender surgeries and hormonal treatments, while noting that many aren’t actually transgender.

Spotify has also recently removed a number of podcasts promoting QAnon conspiracy theories. But now it appears that none of that editorial oversight carries over into music.

Rogan himself blasted the contingent of ‘woke kids’ protesting his podcast, while raising the issue of broader editorial inconsistencies.

“If you have a problem with people saying terrible shit and you work for Spotify, maybe you should listen to some of the lyrics,” Rogan remarked.