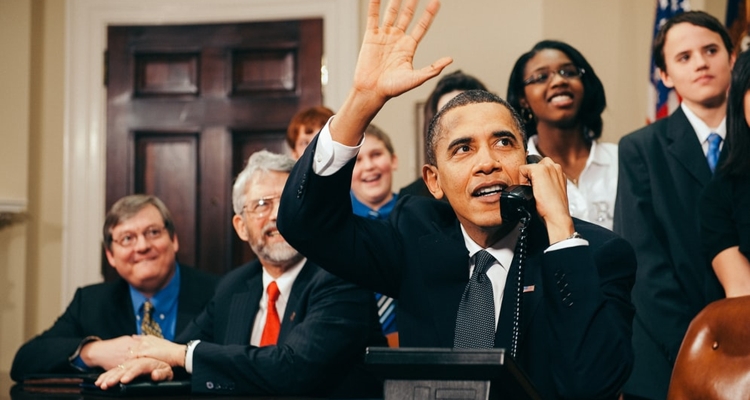 Barack Obama is calling out rappers who supported Trump — including Lil Wayne and Lil Peep.

The former president is giving his first interviews after nearly four years of silence during the Trump presidency. In an interview with The Atlantic, Obama says he has to remind himself that rappers value the same things that Trump does.

His comments about rappers come after Lil Wayne and Lil Pump publicly endorsed Trump ahead of the 2020 election. Both 50 Cent and Ice Cube also flirted with Trump support, though 50 Cent eventually walked back his endorsement. Ice Cube said Trump was the only one willing to work with him on his initiative for Black America – he says Biden didn’t respond. When asked about Trump’s general appeal and his populist ideas, Obama says he’s surprised.

“You’re just surprised by the horse populism rode in on,” the Atlantic interviewer asks Obama. “Yes, and it’s this indication of parts of popular culture that I’ve missed,” Obama admits of rappers who support Trump.

“It’s interesting – people are writing about the fact that Trump increased his support among Black men and the occasional rapper who supported Trump. I have to remind myself that if you listen to rap music, it’s all about the bling, the women, the money,” Obama says.

“A lot of rap videos are using the same measures of what it means to be successful as Donald Trump. Everything is gold-plated. That insinuates itself and seeps into the culture,” he adds. He’s not wrong: back in the 90s, Trump was heavily referenced in rap songs. So it’s not entirely surprising that modern-day rappers would also gravitate to the President.

In a recent rally, Lil Pump thanked Trump for reducing the number of troops stationed worldwide, before digging on ‘Sleepy Joe.’ 50 Cent spoke of some of the frustrations he’s experienced with the Democratic ticket. “A lot of energy being spent on telling me to stay in my lane,” 50 Cent tweeted. “Zero energy spent on telling Biden/Harris they need to do way more for Black people to sure up the vote.”

On that note, both Ice Cube and Lil Wayne expressed support for Trump’s support of the Platinum Plan. It’s a plan to address many grievances by the Black community. Ice Cube later clarified he’s willing to work with anyone to focus on those issues, and wasn’t endorsing either candidate. “I’m not going in there talking about people of color or diversity or none of that stuff,” Cube said.

“I’m going there for Black Americans, the ones who are descendants of slaves.”