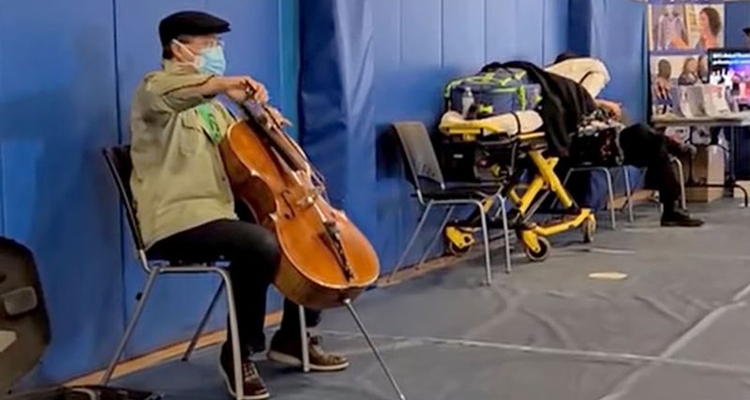 The internationally-acclaimed cellist was at the Berkshire Community College vaccination site yesterday. He was filmed performing with his cello and mask for those who were behind him. The 15-minute performance included pieces by Bach and Schubert, with Ma receiving a hearty round of applause from the crowd.

When asked why he decided to perform, Ma said it was his way of giving something back. “What a way to end the clinic,” Ma told the local newspaper. He visited the same clinic for the first round of his vaccine but did so quietly. Upon returning for the second round of the vaccine, Ma had his cello in tow. Staff says the din of the clinic quieted as the cellist began playing.

“It was so weird how peaceful the whole building became, just having a little bit of music in the background,” says Leslie Drager, the lead clinical manager for the vaccine site. The college later shared pictures from the event on Facebook.

“Today at the #MyBCC vaccine clinic, folks waiting in the observation area were graced by the musical talents of amazing cellist Yo-Yo Ma!” the post reads. Ma lives part-time in Berkshire and has played a few pop-up concerts in the area in September. More than 880,000 people in Massachusetts have received their vaccine, around 13% of the state’s total population.

Yo-Yo Ma isn’t the only artist giving back to the community after receiving help.

Evan Dando of the Lemonheads gave an impromptu performance in a Walgreens after employees found his wallet. The frontman forgot his guitar strap, so he struggled to play the instrument standing up. But that didn’t stop him from belting out the track, “Confetti.”

Dando tweeted that he dropped his wallet while traveling from the Mariner Hotel. A few minutes later, someone who works at Walgreens tweeted him back. “Your wallet was just turned in to us. I’ll keep it in the office safe until you can get to it,” the handy employee tweeted at Dando.

The Lemonheads did a live stream of their music on October 25 for fans. Tickets to the show were only $10, with additional perks available for those who paid more. The live stream was to help support its touring staff during the era of COVID-19 when so many are out of work. Now that vaccine centers are rolling out millions of doses a day; hopefully, the touring industry gets back to work.