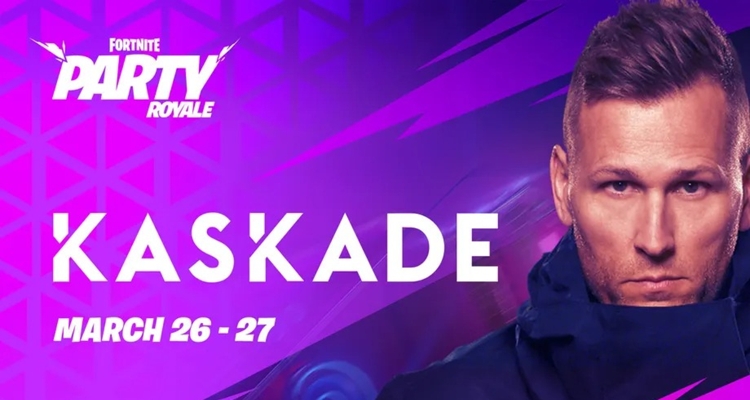 The concert takes place in Fortnite’s Party Royale game mode, which removes the violence. The event is also featuring a tie-in with Rocket League, a game developed by Psyonix and owned by Epic Games. Epic Games is taking advantage of a long-standing partnership between Psyonix and Monstercat. Kaskade released his Monstercat debut, an EP called Reset.

Kaskade will perform the entirety of Reset within Fortnite Party Royale.

The concert will be followed-up by a new season trailer for Rocket League. The producer and DJ will be able to drive Rocket League cars around various in-game stages and “arrive at the new Neon Fields for a festival-style performance.” Don’t have Fortnite installed on your PC, console, or another gaming device? It can be watched on the Houseparty app – another of Epic Games’ acquisitions.

Fortnite’s concert series has taken a back seat in recent months as the developer focuses on gameplay. The concert series first kicked off in 2019 with a record-setting performance from Marshmello. It was also a surprise hit during the early months of the pandemic.

Travis Scott’s Astronomical concert last April attracted more than 12 million people. The success of that concert prompted the launch of the Party Royale Mode. Since then, it has become an avenue for cross-cultural spectacles and has turned Fortnite into a virtual concert tour-stop.

Epic Games expanded its technology set up to make live events for Fortnite sound better. It set up a new studio space in Los Angeles, giving artists a sound-stage to work from. It also launched a series of three-week concerts in September to promote the new feature, but it’s been relatively quiet since then.

The Kaskade concert in Fortnite will be the most recent concert on the Fortnite stage.

The Kaskade concert will run inside the Fortnite Party Royale mode on March 26 at 8 PM ET/5 PM PT. It will re-run on March 27 at 9 AM ET/6 AM PT and 2 PM ET/11 AM PT. Epic Games says the event will be part of the next Llama-rama event, where players can earn in-game items and rewards. Those rewards can be earned by playing both Rocket League and Fortnite, starting March 25 through April 9.

Fortnite is heating up the 2021 virtual concert party, but will Kaskade attract Travis Scott numbers? Fortnite’s position in the gaming industry is still undeniable, but other contenders like Roblox are edging in on the virtual experiences market.