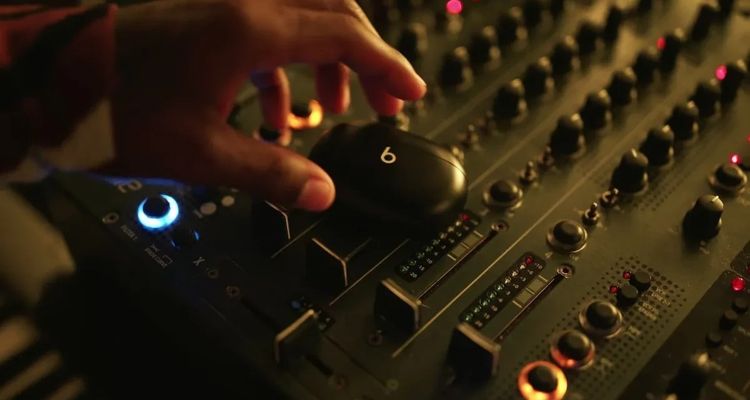 Rapper Roddy Ricch premiered his new song with a small teaser for an upcoming Apple product. Ricch is seen using the Beats Studio Buds in black to record a part of the song before he is teleported back to the 1980’s and the set of ‘Thriller.’

Since the AirPods Studio Max debut, some analysts have wondered about the lack of focus on Beats. But Apple is teasing the upcoming true wireless buds with help from Roddy Ricch and LeBron James. James posted a photograph of him wearing the white Beats Studio Buds on Instagram.

The new Roddy Ricch video gives us a more detailed look at the case for Beats Studio Buds.

The case itself looks very similar to the AirPods Pro charging case. You can see the prominent ‘b’ branding on the case. The earbuds themselves appear to have a very compact design that protrudes from the ear. They also feature the Beats branding on each bud.

While the Beats Studio buds are unreleased, we do know they will be powered by an H1 chip. That’s the same chip used in Apple’s AirPods Pro. It offers active noise cancellation, support for ‘Hey Siri’ hands-free use, and instant pairing with other iOS devices. We don’t know how much these will cost when they debut.

The AirPods Pro costs $249, while the regular AirPods retail for $159. Beats in-ear headphones cost around $49 for Beats Flex to $169 for Powerbeats Pro. It seems like $99-$150 seems to be the sweet spot for these. If Apple prices them competitively against AirPods – it could help cannibalize sales from Samsung and Google.

Both Samsung and Google are debuting true wireless earbuds for their smartphone ecosystems. Will Beats Studio buds be able to compete?

Google’s latest Pixel Buds start at just $99 and include real-time translation – a feature not available anywhere else. Apple is also going all-in on lossless audio and spatial audio support – while other manufacturers play catch up.

While Apple is going all-in on lossless and spatial audio support, the days are still early. An Apple spokesperson has confirmed to Digital Music News that lossless audio is not supported on any current AirPods model. “AirPods Max wired listening mode accepts analog output sources only, while AirPods Max currently does not support digital audio formats in wired mode.”