Y2mate, One of the World’s Largest YouTube-to-MP3 Converters, Officially Shuts Down In the US & UK 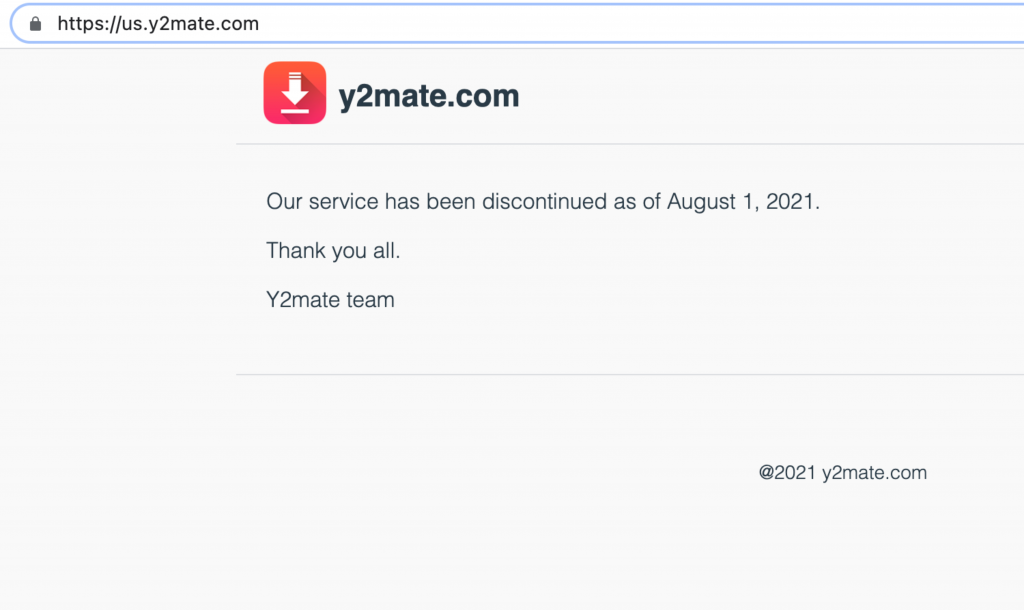 Y2mate, one of the largest YouTube-to-MP3 converters in the world, is suddenly calling it quits in multiple countries.

Y2mate is officially offline, at least in the United States, United Kingdom, and for a percentage of Australian users. The site, at y2mate.com, is one of the largest YouTube-to-MP3 converters (or ‘stream rippers’) in the world. “Our service has been discontinued as of August 1, 2021. Thank you all. Y2mate team,” the US-based site read as of August 1st.

That notice is also appearing in the United Kingdom, according to a report this morning from Torrentfreak.

It’s unclear whether shutdowns are also happening worldwide, though Digital Music News has only been able to confirm shutdowns in the US (where we’re based), Australia (based on a user report), and the United Kingdom as noted. But as of August 3rd, the site remains available in other countries, including European countries like Germany, The Netherlands, South American countries Argentina and Brazil, and Asian countries like Singapore and Korea.

Those availabilities were also confirmed in testing by Torrentfreak, though it remains unclear if those installations will also be shuttered. In summary, the Y2mate site itself appears to be functional, but is getting geo-blocked based on the country. That is now also the fate for both FLVTO.biz and 2conv.com, both Russia-based YouTube-to-MP3 converters that have also been shut down in the US and UK.

In Australia, one user reported that Y2mate.com is unavailable. Instead of the usual page, the following message appears: “Access to this website has been disabled by an order of the Federal Court of Australia because it infringes or facilitates the infringement of copyright. 1800 086 346 for information.”

Other Australian users have reported that they can access the site, however. That includes a commenter below, which DMN can now confirm with our own tests of the region.

The shutdown appears to be the result of a long-running battle with the RIAA, which represents major recording labels Universal Music Group, Warner Music Group, and Sony Music Entertainment.

Back in May of 2019, Digital Music News first reported that the RIAA had launched a major attack against Y2mate, specifically by issuing subpoenas against domain name registrant Namesecure and CDN Cloudflare.

That may have been part of a far broader attack against the video stream-ripper in multiple countries worldwide. But it’s currently unclear if Y2mate is getting shut down in specific countries or faces a complete global shutdown.

Early August 3rd, the RIAA responded but declined to comment on the Y2mate situation to Digital Music News.

According to SimilarWeb, the stream-ripper draws more than 128 million visitors monthly. Its largest markets are — or were — the United States, Mexico, India, Japan, and Colombia, according to the web traffic tracker.