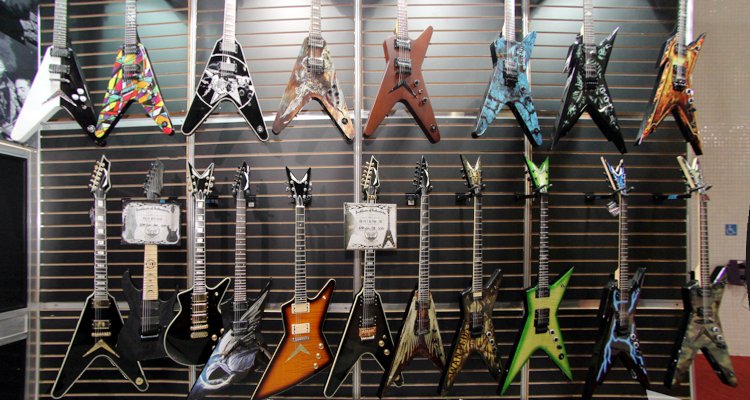 In Dime We Trust, a revocable living trust registered in Dimebag Darrell’s native Texas, recently submitted the complaint to a Florida federal court, through trustee (and Abbott’s longtime partner) Rita Haney. Additionally, Haney informed fans of the lawsuit on the Dimebag Darrell website, writing that “it is with great sadness that I announce the longstanding relationship between Dimebag and Dean Guitars is over.”

According to the complaint, this relationship began in November of 2004, when Abbott agreed “to endorse a signature line of guitars” manufactured by Dean, involving the use of “his name, likeness, photographs and endorsement in connection with” these instruments and a clothing line.

Per the legal text, Abbott was to receive a portion of the proceeds from the instruments’ sale, “a lump sum amount for each full front [magazine] cover bearing” his photo as well as the Dean headstock and logo, and, “for personal and promotional use” alike, “a set number” of the domestically produced and imported guitars that he endorsed.

“The Original Endorsement Agreement also expressly stated that Dean Guitar’s [sic] acquired no rights in the tradenames or designs for the ‘Stealth Guitar’ or ‘Razorback Guitar,’ and upon termination of the agreement would cease selling the guitar,” the complaint notes.

After Abbott was shot and killed at a Damageplan show in December of 2004, his estate in 2014 inked an updated agreement with Dean Guitars, per the lawsuit, lending his name and likeness to string instruments – not “related equipment and products,” and at a reduced royalty rate.

Following Vinnie Paul’s 2018 passing, Haney in June of 2020 was “reinstated” as the representative of Darrell’s estate; the Dean endorsement deal had concluded in April of 2020, with a sell-off period wrapping six months thereafter. Finally, in terms of the multifaceted situation’s background, Dean Guitars CEO Elliott Rubinson passed away in 2017, and Haney “found herself working with the new CEO,” Elliott’s son Evan.

“Ms. Haney found Evan to be incredibly disrespectful and often times belligerent to the legacy of Abbott,” the lawsuit states. “He acted without regard for the success Abbott brought to his father’s company, and to which ultimately contributed to his inheritance.”

Bearing the point in mind, along with a failed meeting between the parties, Haney via her attorney sent the new Dean CEO a letter “offering an amicable and private unwinding before seeking to enjoin the continued use of” Darrell’s name and likeness. Evan Rubinson, for his part, called Haney’s complaints “baseless” in a late-June response and urged her to “please serve me with an official lawsuit,” the text indicates.

“Dean Guitars has continued to use the name, likeness and photographs of Abbott to sell guitars, merchandise, clothing, pick-ups and guitar straps that include Abbott’s artwork, including the copyrighted Dean from Hell artwork, and the Razorback and Stealth style guitars and trademarks,” the complaint’s qualms proceed. The guitar line in question consists of 16 instruments, each featuring Abbott’s name or his Stealth or Razorback trademarks, in addition to Dimebag-branded guitar pickups and miniature guitars.

The defendants failed to pay the photograph-related lump-sum compensation and provide models of the endorsed instruments, the complaint states, besides allegedly using Darrell’s artwork without permission (the contract “provides for no such license”) and registering multiple trademarks without permission.

On the latter front, Dean and a second defendant, Concordia Investment Partners, “colluded and illegally and fraudulently filed trademarks on the Razorback trademark and guitar design,” the plaintiff maintains. One of these two Razorback trademarks – No. 3,644,934 and No. 3,562,989 – was transferred in 2009 “to the Board of Trustees of the University of Arkansas” without the estate’s knowledge or permission, the lawsuit indicates.

“A full and complete accounting is necessary and appropriate under the circumstances, in order to determine the nature and extent of” Dean’s “wrongdoing in this matter,” the action concludes.

Dean CEO Evan Rubinson fired back against the suit in a statement, relaying in part: “We are shocked and saddened to see the actions that Ms. Haney has taken after both the Abbott brothers have tragically passed away, and we wish her the best in her future endeavors. However, it is unfortunate that Ms. Haney has allowed her unrealistic demands and accusations to dictate the future of the Dimebag Darrell legacy in the absence of Dime’s immediate family.

“Dean Guitars is proud to have played a role in ensuring Dime’s legacy not only survived, but thrived over the past 17 years. We have stood by the estate through good and bad. Ms. Haney’s claims — across the board — are baseless, without any merit, and not grounded in reality. We will allow the full truth to come out as the legal process takes its course.”