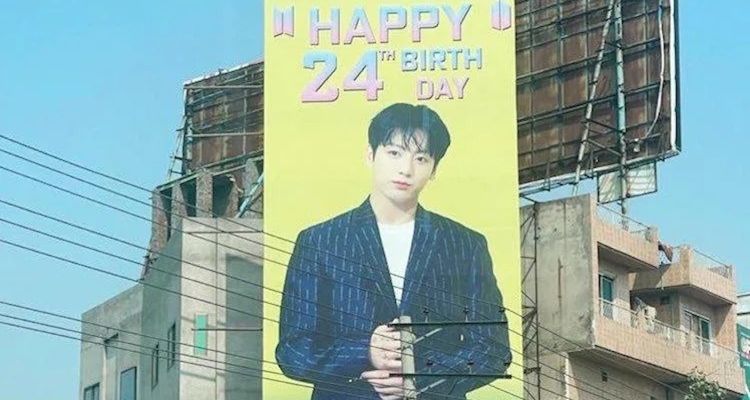 The billboard was commissioned on September 1 at a busy intersection in Gujranwala, Pakistan. It features a picture of Jungkook with the phrase ‘Happy 24th Birthday’ and ‘Jungkook BTS Gujranwala Army.’ Pakistani fans were overjoyed to see the BTS Army’s efforts in the country.

But authorities quickly ripped the billboard down after it grew in popularity on Facebook. “We received a lot of complaints from people. There was so much commotion,” Furqan Aziz Butt told VICE World News. “There are young people in this city. This group [BTS] has a negative influence on them and encourages them to behave in wrong activities. They promote homosexuality.”

“Why was this put up here? They don’t have a brand name here nor do they sell products here. The people who put it up call themselves the Gujranwala army. There’s only the Pakistan army here,” Butt added. He’s clearly unfamiliar with the BTS Army and the fact that fans from across the globe listen to K-pop.

“Older people are of the opinion that their physical features and attire are too feminine because they consider them ‘too skinny’ and have an issue that they put makeup on their face,” says one 24-year-old BTS fan from Islamabad. The removal of the billboard in Pakistan mirrors China’s crackdown on what the CCP defines as ‘effeminate’ behavior.

China’s government banned effeminate men from TV, telling broadcasters to tighten control over who can appear over the air. Broadcasters must “resolutely put an end to sissy men and other abnormal esthetics,” the TV regulator said. Chinese officials are concerned that Chinese pop stars are too influenced by South Korean and Japanese singers and actors.

Other regulations include avoiding the promotion of what the CCP calls “vulgar internet celebrities,” and the admiration of wealth and celebrity. The CCP says broadcasters should “vigorously promote excellent Chinese traditional culture, revolutionary culture, and advanced socialist culture.”

China is cracking down on its citizens’ free time, too. Children under 18 can only play games 3 hours a week, between 8 and 9 pm on Friday, Saturday, and Sunday. The country is also banning programs about the children of celebrities. As a result of the crackdown, fan clubs and entertainment news accounts were suspended on Weibo.