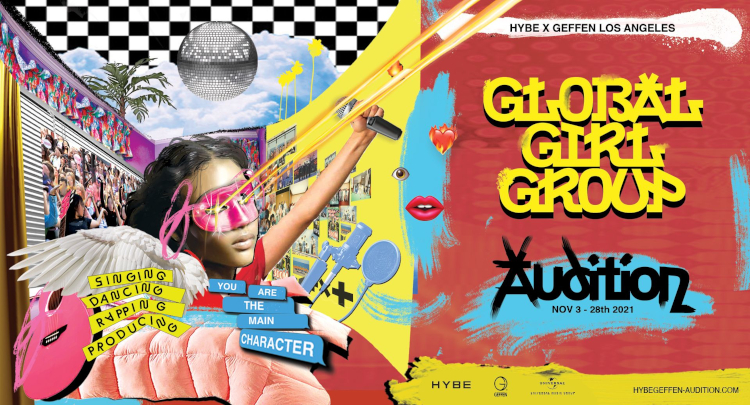 Back in February, BTS agency Hybe and Universal Music Group announced plans to create “a new global K-pop boy group” in the United States as part of an “expanded strategic partnership.” Now, less than two weeks after BTS jumped from Sony Music to UMG, the latter Big Three label and Hybe are looking to form “a global, diverse, and multi-talented girl pop group.”

Hybe and Universal Music Group unveiled their ambitious plans to develop a female K-pop group today, via a formal release that was emailed to Digital Music News. The entities are initiating this search specifically with a month-long audition dubbed the HYBE x Geffen Global Girl Group Audition, and “aspiring artists” have until November 28th’s conclusion to submit “at least a one-minute video or music file showcasing their performance, alongside a clear upper body and full body frontal photo.”

Applicants “must be female, between the ages of 15 and 19 (16 to 19 for EU residents), and exhibit talent in singing, rapping, dancing and/or producing,” the release from Hybe and Universal Music makes clear – though it’s worth noting that some members of BTS, today’s most popular and financially successful K-pop act, are pushing 30.

It’s unclear exactly how many professionals will be part of the female K-pop group – BTS consists of seven individuals – but Hybe and UMG have likewise indicated that the selected persons will complete a decidedly all-encompassing training program.

“HYBE and UMG will collectively emphasize artist development through components such as music and performance training as well as life skills training,” the text proceeds, “including mental wellness and music business and financial literacy, to lead a rewarding and sustaining career.

“This also notably represents the first time a U.S.-based pop girl group will be created and modeled based on the world-renowned K-pop training and development system—a full production that combines everything from music, performance, fashion, music videos, and communications with fans,” the announcement message elaborates.

“Upon its final formation and completion of the audition and training process” – the document doesn’t specify how long said training process will last – the girl group will release music “under the forthcoming JV label created by HYBE,” which itself is set to partner with Universal’s Geffen. (The nuances of this partnership were disclosed at the time of the aforementioned February pact concerning the K-pop boy group.)

Lastly, regarding the in-the-works act’s location, the release states that “preparation will take place in Los Angeles, where the pop girl group will also debut.” Far from being limited to stateside applicants, however, the group will be “made up of artists around the world who are deeply passionate about music and aspire to be the next global superstar.”

It bears disclosing that the audition website’s FAQ section encourages prospective applicants who are under the age of 15 to “come back for other auditions that we will open” – seemingly confirming that similar programs are expected to roll out in the future.

Needless to say, creating and developing a prosperous K-pop girl group based out of the United States is a tall task, and notwithstanding the previously highlighted earning capabilities of BTS, only time will tell whether the multifaceted undertaking pays off.