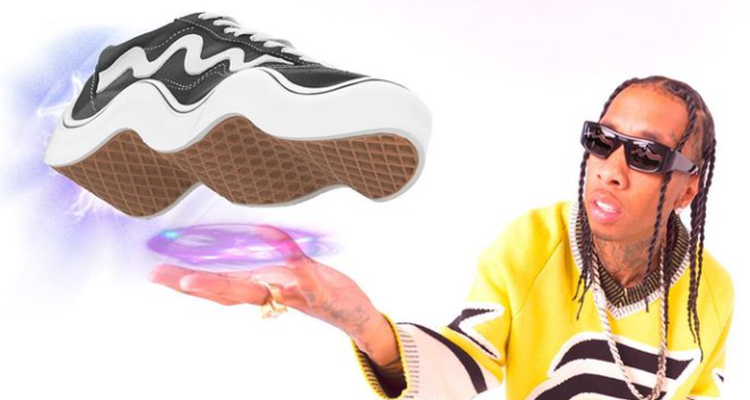 A federal judge has blocked the sale of Tyga’s Wavy Baby Shoes after Vans sued, calling them knockoffs. Here’s what we know.

The attorney for Vans asked the judge to block sale of the shoes, arguing that customers would confuse them as blatant knockoffs. Meanwhile, lawyers for MSCHF, the company that produced the Wavy Baby Shoes for Tyga, argued there’s no way you could skateboard in them.

“It is wavy, it is wobbly, and it is not something that you can easily skateboard in,” MSCHF attorney Megan Bannigan told the judge. The company argues that the shoes are meant to be a commentary on society, consumerism, and the popularity of brands like Vans.

MSCHF made the shoes by taking a photo of Vans’ Old Skool shoe and running it through a Photo liquify filter. The result is a shoe that looks like an acid trip upon first glance. They were first made available to the public on April 18 and so far, roughly 280 pairs of the shoes were distributed to Tyga fans. But MSCHF says it won’t create or ship any more of the shoe while the lawsuit is pending.

Vans attorney Lucy Wheatley shared slides comparing the shoes side by side. She also includes a video in which Tyga microwaves a pair of Old Skool sneakers and they ‘turn into’ Wavy Baby shoes upon removal from the microwave. Also included in evidence are comments from MSCHF’s creative director during a podcast where he admits that the Vans shoe served as inspiration for the Wavy Baby shoes.

Vans’ attorney says the argument that the shoes can’t be word is ludicrous. “It has a glad footbed. You can wear it. I have worn it walking around,” Wheatley continues. “They advertise it as a sneaker; there’s no explanation beyond that.” During these comments, Wheatley showcased social media comments from people who believed the sneakers were a collaboration with Vans.

A NY District Court judge has granted Vans’ motion for a temporary restraining order to prevent sale of the shoes. The judge also granted a preliminary injunction in the old Skool style trademark infringement suit. MSCHF must cease marketing and distributing the shoes and issue a refund to any customers who were duped into believing they were buying an official Vans collaboration.