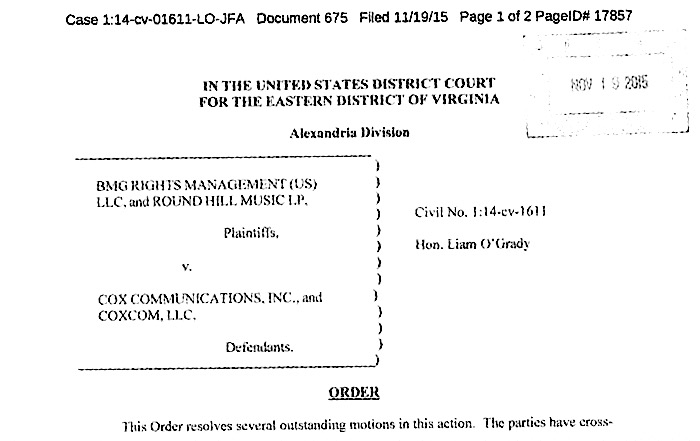 Last year, two music publishers had the balls to sue a major ISP, an expensive and risky undertaking.  Now, that gamble is paying off: late last week, a federal judge ruled that Cox Communications, one of the largest ISPs in the U.S., has forfeited its right to DMCA ‘safe harbor’ protections based on its failure to terminate the accounts of repeat infringers.

The decision represents a massive setback not only for Cox Communications, but all broadband access providers in the US, most of whom have assumed little-to-no responsibility for large and ongoing levels of copyright infringement.

The ruling pertains to a summary judgment motion by plaintiffs BMG Rights Management and Round Hill Music, and doesn’t end the long-running warfare between the parties.  But it could fundamentally alter the hands-off manner in which ISPs and broadband access providers deal with piracy — or rather, don’t deal with it.  “For several years, Cox had an ‘under the table’ policy of purporting to terminate repeat infringers while actually retaining them as high speed internet customers,” the plaintiffs argued in papers recently filed.  “The ‘terminations’ were in name only as Cox immediately reactivated these infringers without ever canceling their accounts.”

Indeed, Cox has been lackadaisically dealing with its most pernicious infringing subscribers, who are, conveniently, typically paying big premiums for high-data accounts.  That makes business sense for Cox in the short term, but could create longer-term issues. The reason is that Cox’s policy of ignoring big-time pirates violates a critical requirement of the Digital Millennium Copyright Act (DMCA), which calls for providers like Cox to, well, do something about it.  “As a matter of law, allowing known, repeat, flagrant infringers to continue to use the network does not satisfy the DMCA’s requirement of an appropriate repeat infringer termination policy,” the Plaintiffs wrote.

“There is no genuine issue of material fact as to whether defendants reasonably implemented a repeat-infringer policy as required by Section 512 of the DMCA.”

US District Court judge Liam O’Grady agreed, effectively stripping Cox of the very cushy DMCA shield.  “The court grants the motion with respect to defendants’ safe-harbor defense under the Digital Millennium Copyright Act (“DMCA”),” Grady opined (full ruling below).  “There is no genuine issue of material fact as to whether defendants reasonably implemented a repeat-infringer policy as required by Section 512 of the DMCA.”

Enter Rightscorp, an aggressive copyright enforcement firm that has factored as a critical party in this litigation.  Rightscorp, a staunch pro-copyright cop (and DMN partner), has been deluging Cox with infringement notices to pass to its customers, a pass-through that Cox has flatly refused (Rightscorp can identify IP addresses, but only Cox can match those to account holders).  Throughout, Cox has alleged that Rightscorp uses bullying tactics to force settlements with infringing subscribers, though Cox itself has also refused to police its own network.


Indeed, Rightscorp is hated by ISPs like Cox, but big copyright owners have made little headway with friendly diplomacy.  Just recently, Rightscorp was tapped by Sony/ATV Music Publishing, the largest music publisher in the world, to combat a pernicious piracy problem that simply isn’t abating (and for more on that, read this).  Elsewhere, companies like ToppleTrack have emerged to help smaller rights owners, including independent artists and labels, deal with user torrenting of their content.

Despite these interventions, the underlying problem remains a relative free-for-all when it comes to the illegal torrenting and downloading of songs, movies, books, and games, a problem that goes far beyond Cox’s network.  Now, the question is whether Cox, and other broadband access providers, can continue banking on that ‘green zone’ of piracy and the cash that comes with it.  Stripped of the DMCA, Cox may now be forced to argue that they can’t be pinned with ‘secondary liability,’ either in the form of ‘contributory’ or ‘vicarious’ infringement liability, a more tricky  ‘dumb pipe’ defense.