Spotify CEO Claims the Music Industry Would Be Dead Without Spotify 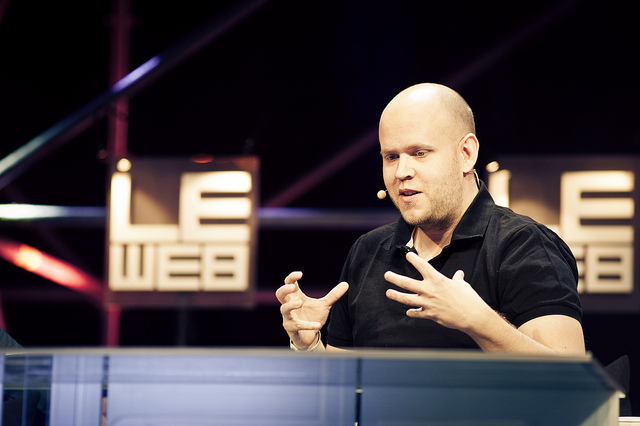 Are streaming services helping the music industry grow, or having a harmful impact?

Streaming services are now enjoying unprecedented growth, though it’s been non-stop warfare with the music industry.  At the dawn of Apple Music in July of last year, Taylor Swift pulled her music based on a high-profile disagreement over payment.  Adele flatly refused to license Apple Music and Spotify.  Then, there was the Grammy fiasco last night, in which NARAS president Neil Portnow attacked streaming services like Spotify for not paying artists fairly.

All of which brings us back to the biggest industry question: are music streaming services harmful to the industry?

Spotify CEO Daniel Ek doesn’t seem to think so.  Actually, he thinks the exact opposite, and goes as far as taking full credit for pulling the music industry out of years of decline towards positive growth.  In a Q&A session on Quora, Ek claimed ample credit for a music industry recovery.  “Now, finally, after years and years of decline, music is growing again, streaming is behind the growth in music, and Spotify is behind the growth in streaming.”

Essentially, Ek is claiming that without Spotify, the music industry would be in a deep decline, if not totally dead.   And the basic premise behind this assertion is that by pumping money into the music industry, everyone is now benefitting.  But that analysis fails to consider what artists are getting paid for their work (if they’re getting paid at all).  After all, it’s the artists that are creating the music, and it’s the artists that are suffering the most alongside streaming’s growth.

For many artists, the benefits don’t seem to be trickling down.  Despite Spotify claiming that 70% of its revenue is paid back into the music industry and that it has paid in excess of $2 billion to the music industry since it was founded in 2008, many are still questioning who actually benefits.  According to reports, the cut that artists are getting works out less than half-a-penny a play, and artists are simply not satisfied.

And the biggest strikes are coming from superstars.  Shortly after Swift pulled her music from Spotify, superstars Adele and Prince amongst several others have followed suit.  Others like Lady Gaga have played along with Spotify, but ultimately complained.

The question is whether Spotify is actively addressing this issue, or simply spinning platitudes.  ”We love music, we love all the amazing people who make it, and we want to succeed together,” Ek continued.  But, artists are not really buying what Spotify is claiming.  If the streaming service wants artists to stay on board, they will have to re-examine their payment structures so it is viable for artists.  If not, it could seriously stunt the company’s future growth.

For now, Daniel Ek is promising pie-in-the-sky growth, saying that the company ”will give thousands and thousands of artists, songwriters, producers and so on the chance to do what they love, and their fans love, while being paid fairly for doing it”.

The question is, what is fair…?