Amazon Music, Your Marketing Sucks. Here’s How to Fix It. 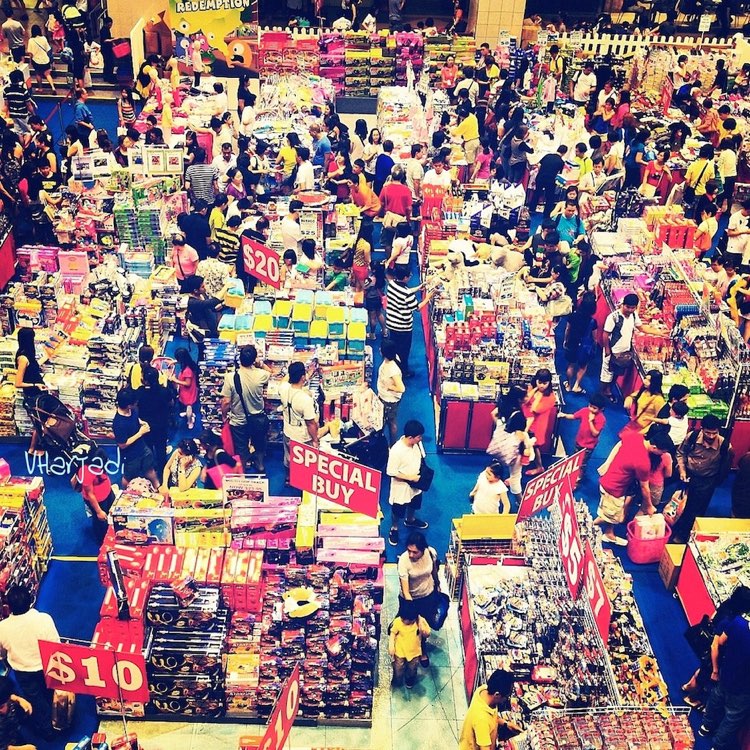 Have you tried Amazon Music Unlimited?  It’s absolutely great.  The playlists make sense, the user interface is intuitive, and selection is great.

In fact, I’d even go so far as to say that overall, Amazon Music is better than Spotify and Apple Music, combined.  That was my initial impression.  I guess Spotify and Apple have been making all the mistakes and correcting them.  Amazon just got the free learning and skipped the first ten classes.

I even got onto national television and said Amazon Music Unlimited ‘nailed it’.  And they did: this service rocks!

But the next day, I realized Amazon Music Unlimited was getting buried amongst five different competing products in aisle 17.  All of which are probably great as well.

But consumers are bad at picking among 5 great, but slightly different, products!  Why am I telling this to you, Amazon?

One thing I thought Amazon would get right is the marketing and product positioning.  After all, they’re the biggest online retail force in the entire universe.  So why is Amazon Music Unlimited such a marketing mess?

Unfortunately, Amazon has now cluttered its music offerings in a completely confusing manner.  For desktop listeners, they have a web player only, which means you have to navigate through Amazon’s page to get to your music collection.

I downloaded the Amazon Music Unlimited mobile app for my iPhone (6, that is).  That’s easy.  But when I’m at work or at home, I want to access it from my Mac.  That’s when the trouble really sets in!

Because I can’t remember where I put it!

How bad could that be?  THIS bad: 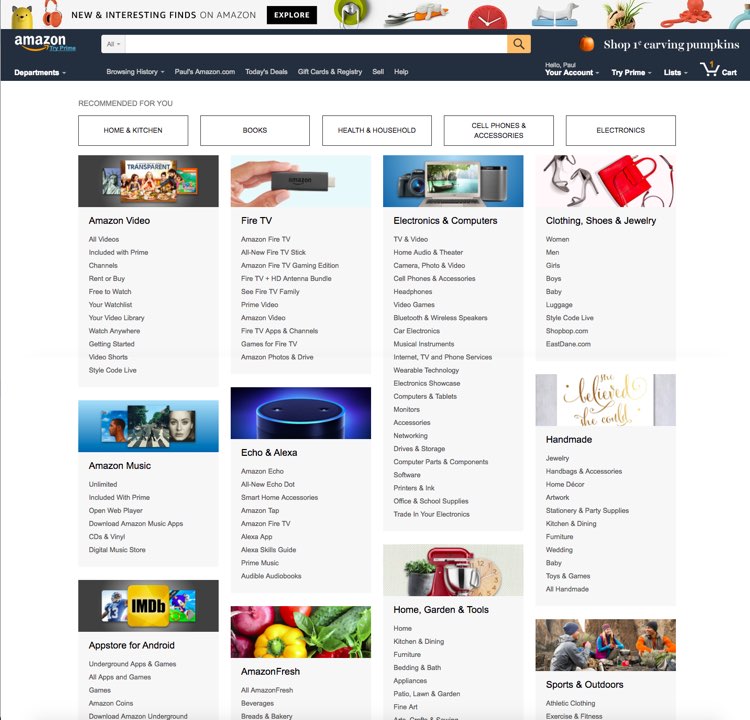 You have to go through the entire supermarket to get to the cheese aisle.  That’s cool for supermarkets, but not when your competitors are hand-delivering the cheese 100 times faster to music fans.

So, just remember where you were, right?  WRONG.  Because once you navigate the gigantic supermarket to the cheese aisle, the selection makes no sense!  It’s like the Havarti is in the Swiss cheese wrapper, bundled with the Meunster.  All bundled with a Salami combination platter.

Do you think your loyal Amazon buyer is having fun working through this? 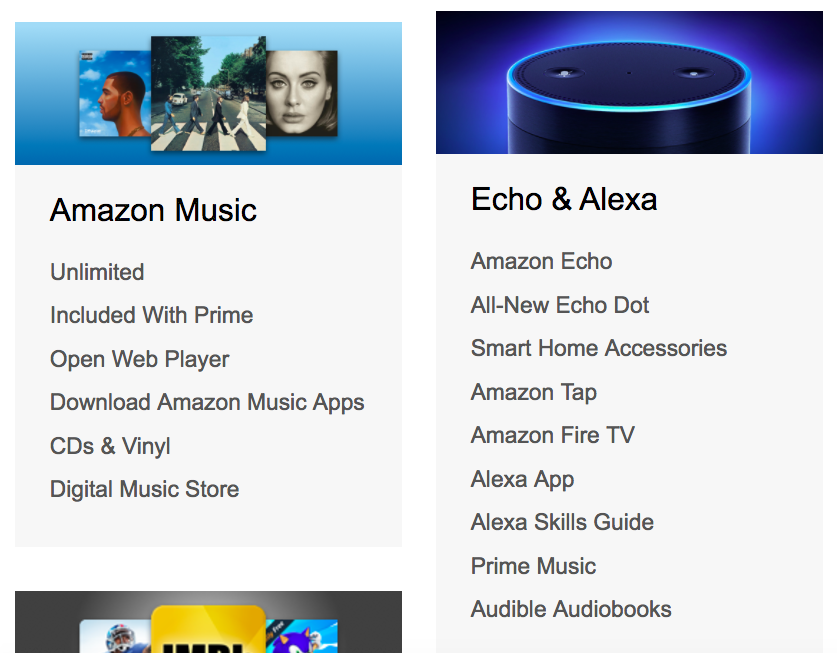 I don’t know where to begin.  What’s the difference between ‘Included With Prime’ and ‘Prime Music’ for my Echo?  What is ‘Open Web Player,’ what does that do?

Wait: is ‘Digital Music Store’… should I get the ‘Amazon Music Apps’ (hint: please don’t go there)?  So ‘Prime Music’ isn’t ‘Unlimited’?

A lot of people don’t even know what streaming is all about!  They’re not inside the tech music bubble.  They’re still making a mental break from downloading.  You’re sending people back three years!

My father is a loyal Prime subscriber.  I’m not going to burden him with the complicated breakdown.  It’s not fair.  Make it easy for him!  Why not smartly merge them into one thing?  Charge one price for one streaming service, maybe pre-existing Prime users get a free subscription for a year.

I don’t know. Figure it out.  Make streaming music on Amazon dead simple. Even bundle it with video. Because right now, it’s way too complicated.  You’re scaring people away.

After you’re done simplifying these confusing streaming offerings, make an even easier desktop app.  Why doesn’t this exist?

Spotify has 40 million paying subscribers, and something like 120 million overall users.  They have a desktop app and a web-based offering.  They do this because people want both.  Spotify knows what they’re doing, because they’re focused on ONE thing all day, every day.

You want to beat Spotify right?  Your user interface is amazing.  It’s better than Spotify’s, which I didn’t think was possible.  Now go for the jugular!

Time to simplify ALL your music offerings, Amazon.

But don’t stop there.

Apple is killing themselves trying to offer 17 different music services in iTunes.  That’s why it’s being called ‘bloatware’.  And it’s also why they’re losing to Spotify, despite having 100 times the disposable income (just like Amazon).  It’s too confusing!

Don’t be Apple.  Make it dead simple and you will win.

Killing things is hard.  There’s blood.  Sometimes lawsuits.  Outrage.  But you have to do it to be competitive.

Music downloads are plunging.  Apple is already nixing music downloads on iTunes Korea and China.  It’s only a matter of time before it happens in the US and Europe.  And now is a fantastic time to sever the dying appendage.

Right now, music downloads are collapsing.  Next year, download sales will be about HALF of what they are now.  So don’t ride this plane into the ground.  Instead, commandeer a parachute.  Offer to convert people’s mp3s into streaming playlists, give them six months free for their troubles.

Show them the future!

Here’s a conversion people aren’t having:

Her: Have you tried Amazon Music?

Him: No, what’s that all about?

Her: It’s like Spotify, but a lot easier.  And actually bundled with Prime.  I really love it.

Him: But Spotify is great!  It’s totally easy.

Her: This is better though.  Well at least I think so.  It’s got all the same selection but it’s easier.  I don’t know, try it!

Him:  OK, cool.  Amazon Music.  I use Amazon all the time, and have Prime.  That’s easy to remember, I’ll check it out.

So keep it simple: Amazon Music = millions of streaming songs, one easy entry point and one proposition.

Do that, and the above conversation will be replicated hundreds of thousands of times.  And you win.