Kim Kardashian Losing an Estimated $300,000 a WEEK on Social Media… 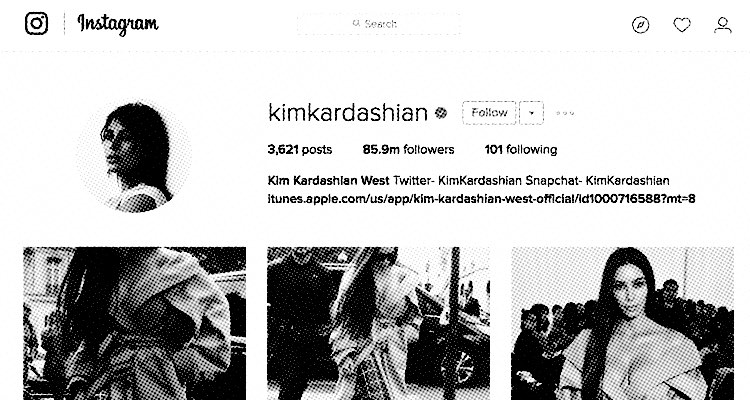 In the wake of a suspicious Paris robbery, Kim Kardashian’s absence from social media could be proving costly.  Kanye West’s earnings, on the other hand, are surging.

Kim Kardashian’s drama-filled robbery in Paris may be costlier than first imagined.  The robbery, if it actually occurred, resulted in the reported heist of a $4 million diamond ring alongside other valuables.  But Kim Kardashian’s resulting absence from social media is costing serious money.  In fact, for a celebrity like Kardashian, it’s sort of like not showing up for work.

The reason is that major brands pay huge sums of money for celebrity posts on social media, with Kardashian no exception.  The payouts include posts on Instagram, Facebook, Twitter, and Snapchat, often in tandem.  Just recently, Selena Gomez fetched an estimated $550,000 for one social media blast for Coca-Cola.

Of course, Selena Gomez isn’t the only celebrity pulling down huge sums.  In fact, celebrity payouts on social media are becoming so huge, the Federal Trade Commission (FTC) is now regulating the deals.

Enter Kim Kardashian, whose social media earning power is just as potent.  And, lucrative: Kardashian is likely receiving $300,000, for one weekly post, according to one estimate offered by Krishna Subramanian of social media firm Captiv8.  That translates into $900,000 during her recent three-week absence, and $1.2 million for the month.

Kardashian’s break from non-stop posts across Facebook, Instagram, Twitter, and other networks is rapidly moving towards the one month mark.  And the unexpected silence isn’t showing any signs of ending.

Kardashian DOWN, Kanye UP.

But if Kardashian’s earnings are sinking, Kanye West’s earnings are exploding.  The self-styled rapping God just added more dates to his ‘Life of Pablo’ tour, and fans are eating it up.  The expanded itinerary now includes shows in Dallas, Denver, Orlando, Boston and Washington, DC, with rescheduled dates in Philadelphia and Detroit.

Currently, the tour is ending with huge bang: a New Year’s performance in Brooklyn.  And those seats won’t be cheap.

In fact, all of the expanded dates are rapidly selling out, with aftermarket ticket prices exploding.  In fact, it looks like the events in Paris are helping Kanye’s bottom line, with the rapper’s girlfriend adding the lucrative drama factor.

But was it all planned?

$1.2 million is a huge hit, if the estimates are correct.  But brands and advertisers are probably willing to wait. In fact, advertising demand will be even greater when Kim Kardashian logs back on.

So is this just another well-orchestrated publicity stunt by the team of Kardashian & West?  Kardashian may be carefully crafting her absence as a way to build anticipation. That is incredibly difficult to achieve in today’s hyper-connected world, but Kim may be pulling it off.

Meanwhile, the Kardashian empire is unlikely to suffer longer-term financial damage.  Instead, the break is likely to result in more money after Kim’s triumphant, heavily-covered ‘comeback’.  That includes bumped-up ratings for Keeping Up With the Kardashians, a show once rumored to be in trouble.

So maybe that $1.2 million ‘investment’ will end up making $10 million in downstream revenues.  Maybe it’s a genius move.