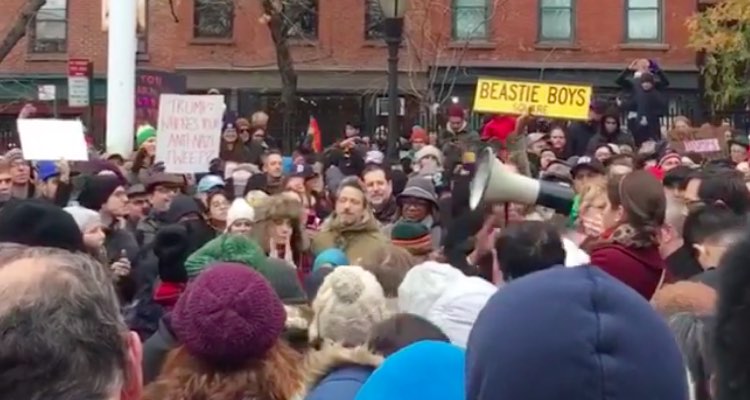 Kanye West supports Donald Trump.  Most other prominent artists, on the other hand, are attacking the President-Elect.  That now includes Beastie Boys member Adam Horovitz, who led a massive rally after a pro-Trump, swastika defacing incident at Adam Yauch Park in Brooklyn Heights.

+November 18th: Kanye West Denies Saying, “I Hope They Build a Wall, I Hope They Get Rid of Them All”

Crowd estimates range from 500 to low-thousands, with the playground stuffed with demonstrators.  After filling the park, angry Brooklynites spilled into adjacent sidewalks and streets.

The reason is this.  Over the weekend, Adam Yauch park was defaced with swastikas and a ‘Go Trump’ message.  The spray-painted hatred was quickly deleted, though the incident was viewed as an attack against a prominent Jewish musician.  Other minorities also felt targeted.

Ben Stiller was also in attendance, just one of several prominent celebrities speaking against Trump.

Horovitz was the most vocal at the rally, demanding that incoming president Donald Trump denounce Neo-Nazi, anti-Muslim hatred and white supremacy movements.  Anything else, according to Horovitz, merely enables and empowers those groups.

The hate groups in question, once existing on the fringe of American consciousness, are now taking a more active, empowered role following Trump’s victory.  Indeed, backers like David Duke have prominently cheered Trump, while incoming Chief of Staff Steve Bannon have been blasted as anti-Semitic.  Hate attacks, meanwhile, spiked in the weeks following Trump’s election. 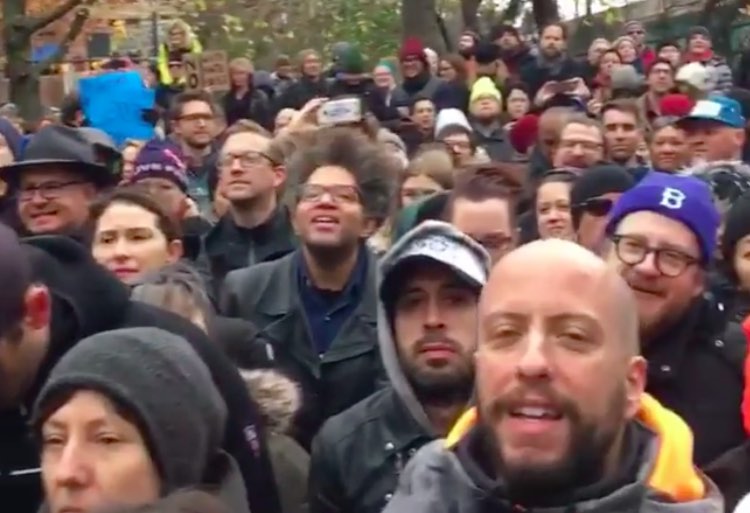 Horovitz declared that silence on the issue is the same as acceptance.  “This is more about someone in our community linking Nazi Germany to Donald Trump in a ‘hell yeah’ kind of way in a park where children play,” Horovitz stated.

Grabbing the megaphone, he continued:

“I’m assuming that we’re all here today because we’re thinking the same thing.  That spray-painting swastikas at a children’s playground is a messed up thing to do.  This is about hate crimes towards Muslims soaring to their highest levels since 9/11.  We elected a president that is giving our children the message that it’s OK to attack people of color.  This is real.  We’ve gotta stand up against hate.”

Here’s a quick video that shows the packed rally.

“If hate is carried out in his name and he says nothing, it becomes his hate.” I love my community. I love this city. Thank you, NYC/BK leaders and citizens for standing together against intimidation and hate, and to all good people all over the country and world doing the same. God bless you all