Live Concerts + Streaming = 73% of the US Music Industry 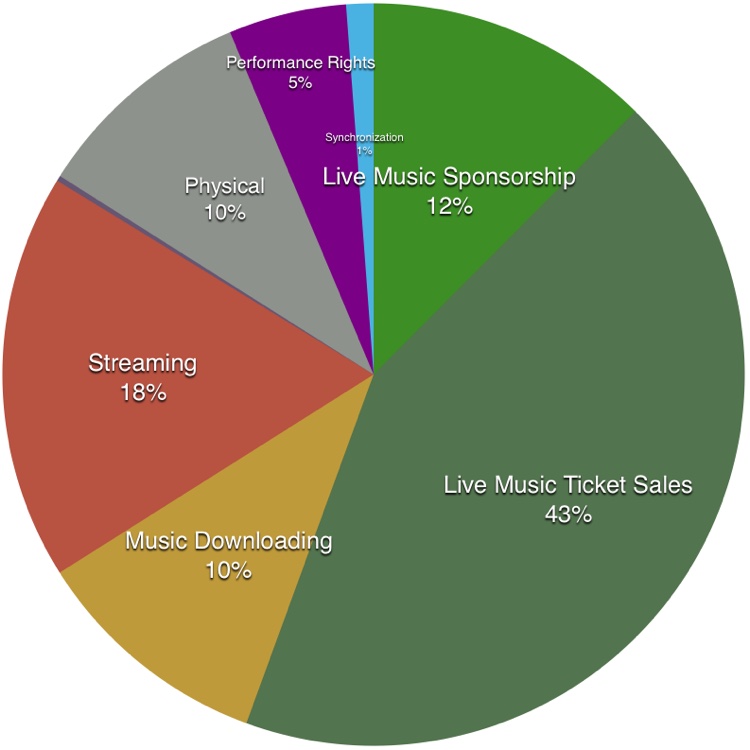 The US music industry is now worth $17.2 billion, according to data calculated by PwC.  And more than half of that is coming from concerts.

Streaming is exploding.  But a majority of the revenue in the music industry is coming from live events.  According to US-based calculations shared by PwC with Digital Music News, ticket sales alone account for 43% of all revenues, with festivals driving the growth.  Big brand sponsorships at events count for another 12%.

In total, the US-based music industry is now worth $17.2 billion, up nearly 11% since 2012.  That’s fantastic news, especially for those focused on live events, streaming services, and vinyl.  Other sectors are bleeding, most notably CDs and music downloads.  Indeed, it’s entirely plausible that both will become rounding errors within 5 years, with downloads potentially facing extinction.

Enter the new trifecta, with each booming sector feeding the other.  A surge in streaming seems fortuitously connected to a thriving festival industry.  And despite its vintage nostalgia, streaming is also theorized to be powering an 11-year LP resurgence.

It’s all a happy infinity loop of growth.  So let’s break them down.

Undoubtedly, streaming has now entered explosion mode, with year-on-year growth at 99.1 percent according PwC number-crunchers.  “Digital music streaming revenue was up a quite astonishing 99.1% year-on-year in 2016 to total $3.0 billion,” PwC relayed.

That calculation does include mega-winnings from Wall Street IPOs.  Though in-fighting among Spotify executives may be confusing the timetable, Spotify is widely expected to mint billions in a heavily-watched IPO as soon as next year.

Meanwhile, vinyl remains robust but stunted.  Thanks to legacy manufacturing issues, vinyl production is severely stunted at this stage.  Even major labels are suffering manufacturing delays, and some plants are outright turning down orders from indies and unsigned artists.

“One hurdle vinyl has yet to overcome is the pressing industry’s capacity issue, which continues to cause order bottlenecks,” PwC relayed.  “The majority of US presses are some 40 years old and in need of refurbishment; the sector needs new plants to come onstream. One notable new entry this year is artist Jack White’s Third Man pressing plant in Detroit, a 10,000-square-foot facility with a set of eight brand new machines capable of turning out 5,000 vinyl units in an eight-hour shift.”

Others are also innovating against this problem.  That includes Vienna-based Rebeat Digital, whose HD Vinyl technology promises to solve a serious supply-side gut.  And, foment a serious explosion in vinyl in the process.

Back to the concert biz, perhaps the real wildcard here is terrorism.  Across the pond, terrorist attacks have hit concerts.  That includes a suicide bombing at a recent Ariana Grande concert, though the long-term impact on concert attendance remains unclear.

Stateside, the problem remains tame, and will hopefully stay that way.