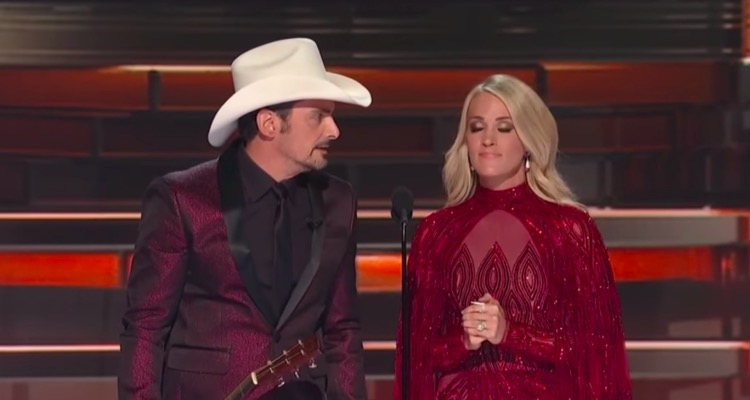 Country stars used to be scared of getting political, much less attack the President of the United States.  Looks like all of that is changing — fast.

In the country world, it’s called ‘getting Dixie-Chick’d’.  And it refers to being totally ostracized in reaction to a political statement.

Here’s the quick history lesson from 2003.  After outwardly protesting then-President Bush’s war in Iraq, the Dixie Chicks got blacklisted by major radio stations and shunned by fans.  Their career never recovered.

That history may explain why so many country stars have been reluctant to speak out about issues like gun control.

Now, it looks like those fears are evaporating.  At last night’s Country Music Awards, two of Nashville’s biggest stars — Brad Paisley and Carrie Underwood — roasted the Commander in Chief.

Well, ‘roasting’ usually doesn’t apply to issues like nuclear war.  So maybe this fits into a different category.  After discussing a range of serious tragedies affecting middle America, Paisley and Underwood segued into a remake of Underwood’s smash hit, ‘Before He Cheats’.

Underwood soon jumped in.  “It’s fun to watch it that’s for sure, till little ‘Rocket Man’ starts a nuclear war. Maybe next time he’ll think before he tweets.”

Before He Tweets ? #CMAawards pic.twitter.com/WNeIDaHwVN

Even more telling is the crowd’s reaction.

Instead of a mixed murmur, the crowd seemed to howl in delight. All of which suggests that the audience at home was doing the same.

Looks like Paisley and Underwood read their audience correctly.  Maybe guns are off limits, but Donald Trump isn’t.  And these seasoned pros picked that up.

It looks like broader politics are fair game, as well.

Earlier, the Country Music Association banned reporters from asking questions related to gun control, domestic terrorism, or anything political.  It was a classic move by a notoriously de-political country genre.  But heavy protests ultimately lifted the restrictions.

+ Guitarist At Las Vegas Shooting: I Was Wrong To Oppose Gun Control

Accordingly, the pair wasted no time lambasting the CMA itself.  “We can’t be doing any of our silly little songs because this year’s show is a ‘politics-free zone,’ ” Underwood noted.

“Are you kidding me? That’s not fair,” Paisley replied, while offering sample lyrics like “Way down wander on the Scaramucci” and “Hold me closer, Bernie Sanders.”

And it indicates an escalating level of protest ahead.