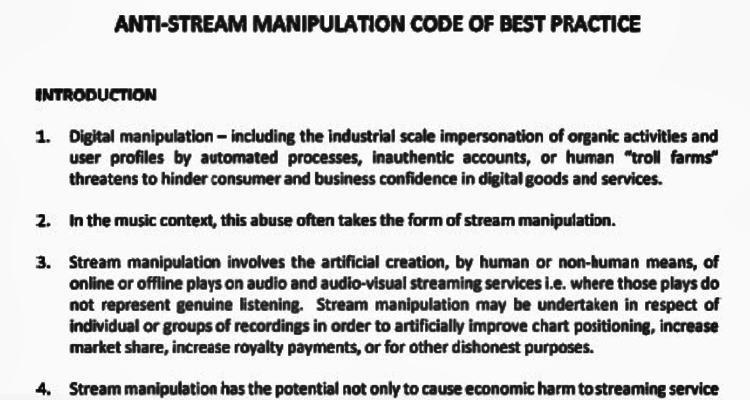 A copy of the full document and its terms is below.

Admittedly, the music industry has a major problem – fake streams.

Now facing a federal investigation in Norway, TIDAL executives deny any wrongdoing, despite authorities receiving a manipulated hard drive as evidence.  An unspecified number of artists and labels have since pulled their music from Jay-Z’s service.

At around the same time, reports came to light Spotify had also gamed the industry to avoid paying top artists like Kendrick Lamar.

In a lengthy piece, Vulture’s Adam K. Raymond claimed Spotify has purposefully filled its service with fake accounts.  The Swedish streamer had yet to tackle “the coverbots and ripoff artists who vomit… inferior versions of popular songs.”  These ‘fake artists’ allegedly manufactured by the company received up to six-figure salaries for ripping off popular songs.

Spotify has since denied any wrongdoing, stating it wouldn’t “pay itself” for fake streams.

Yet, not everyone is convinced.

One particular track, for example, earned around 3,000 streams per day.  Then, that number jumped up to 35,000 streams each day for three days straight.  Then it abruptly returned to its previous numbers.

Poen explained where the fake streams came from – Spotify.

“When we looked at where those streams came from, 100% of them came from six playlists on Spotify.  It couldn’t be more suspicious.  The playlists were created recently.  They gained a bunch of followers in one week.  They’ve never gained another follower since then.”

Now, top organizations and major labels have declared war on platforms which readily allow this form of manipulation.

Clamping down on gaming streaming.

Top tech and music industry companies have signed a new code of conduct.  IMPALA and the International Confederation of Music Publishers (ICMP) are among the signatories of the ‘Anti-Stream Manipulation Code of Best Practice.’

The signatories have agreed on 22 codes to tackle “stream manipulation.”  These include identifying dishonest manipulation and artificial creation “by human or non-human means,” and stating music streaming services and other digital platforms must play “a valuable role” in tackling fake streams.

Each signatory has agreed that the code of conduct will not “affect” existing private agreements with and streaming service providers.

In total, the signatories represent hundreds of different companies and a range of different music industry sectors.

You can view the complete code of conduct below.