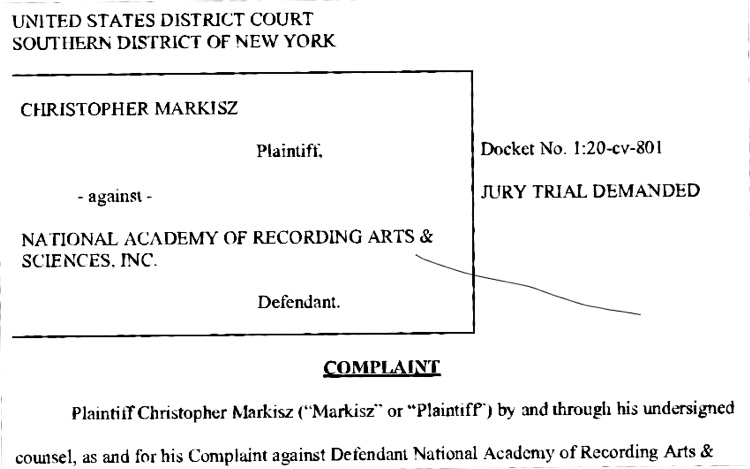 A New York photographer has filed a copyright infringement lawsuit against the Recording Academy over a Snoop Dogg photograph.

In the filing, which was submitted in the U.S. District Court in Manhattan on January 29th, Christopher Markisz and the Liebowitz Law Firm argue that the Recording Academy unlawfully posted a “copyrighted photograph of rapper Snoop Dog [sic]” on the Grammys’ website and Instagram account.

The lawsuit claims that the Recording Academy (aka the National Academy of Recording Arts & Sciences, or NARAS) “did not license the Photograph” and didn’t receive the “Plaintiff’s permission or consent to publish the Photograph.” Additionally, it’s alleged that Markisz’s watermark, bearing his name and a copyright symbol, was “cropped off” the shot of Snoop Dogg.

Compensation-wise, the document says that Markisz is entitled to a piece of the Recording Academy’s profits, “statutory damages up to $150,000 per work,” and a reimbursement for legal fees. If these requests are denied, the filing indicates that Markisz may seek damages “of at least $2,500 up to $25,000” for a number of alleged violations (not solely including the photograph’s use).

The image initially appeared alongside a Grammy.com article that was published on December 5th, 2019. At the time of this report’s writing, the photo was still live on Instagram and Grammy.com; Markisz only received a photographer credit on the latter.

This lawsuit is the latest in a series of setbacks for the Recording Academy, whose ousted CEO, Deborah Dugan, came forward with allegations of corruption, sexual harassment, and a sexual-assault coverup, just days before the 62nd Grammys.

In what appears to be direct response to the ugliness, Taylor Swift, Beyoncé, and Jay-Z boycotted the ceremony. All three were given high-profile seating assignments at the event, according to a CBS seating chart, but canceled just days before the show. Beyoncé and Jay-Z were still in Los Angeles, and didn’t cancel their attendance at a Roc Nation event and Clive Davis’ splashy pre-Grammy party.

While receiving the Industry Icon Award, Diddy claimed that “black music has never been respected” by the Recording Academy while urging a boycott of the event. That was hardly an isolated protest. After taking home an award for ‘Best Rap Album,’ Tyler, the Creator criticized the Grammys’ nomination standards and categories, calling the “urban” and “rap” categories euphemisms for “the n-word”.