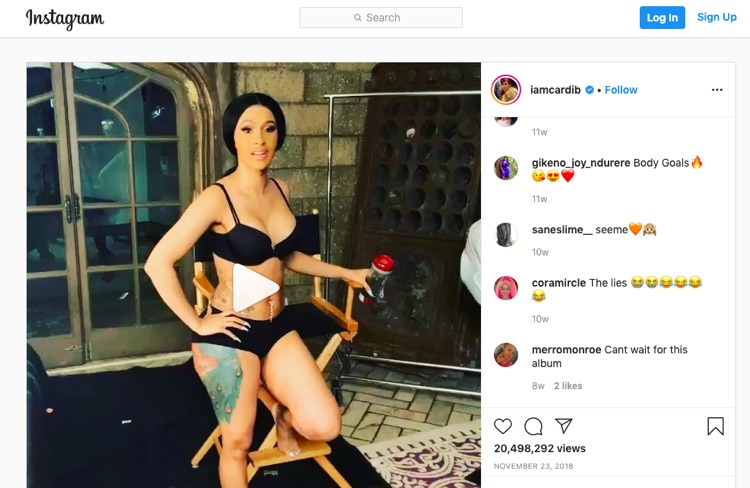 Cardi B touts the benefits of Teami on Instagram, November, 2018

Cardi B, who has nearly 60 million followers on Instagram, published a post about Teami’s Black Friday sale in November 2018; said post ultimately received over 20 million views.

Though the message included a hashtag — #teamipartner — indicating that Cardi had been paid for her effort, the FTC’s letter emphasized that this disclosure was insufficient because users who were browsing the app could view it only after they’d clicked the “more” option to expand the text. Additionally, the FTC alleged that the disclosure was inadequate because Cardi B didn’t explicitly mention the sponsorship in the video that accompanied the post.

The strongly-worded letter, reviewed by Digital Music News this morning, also recommended that Cardi B review the federal government’s sponsored social media post requirements. It further warned that “influencers who fail to make adequate disclosures about their connections to marketers are subject to legal enforcement action by the FTC.” Lastly, the 27-year-old was asked to respond with a letter of her own “describing what actions” she will take to prevent future violations of FTC guidelines and federal law.

Teami itself hasn’t been let off the hook by the FTC. Besides taking issue with the company’s social media influencer tactics, the federal government has disputed the effectiveness and supplemental value of weight loss and detox teas. After Teami informed the FTC that they couldn’t afford the initially levied fine of $15.2 million, the figure was reduced to $1 million.

Cardi B hasn’t publicly commented on the FTC warning, and it’s unclear if she and her team have submitted the requested response, which has a deadline of March 30th.

The New York City native will appear in Fast & Furious 9, which wrapped its principal photography in November of last year and is expected to release in May. However, it’s possible that Universal Pictures will delay F9’s release date due to coronavirus (COVID-19) concerns, as they recently did with No Time to Die.