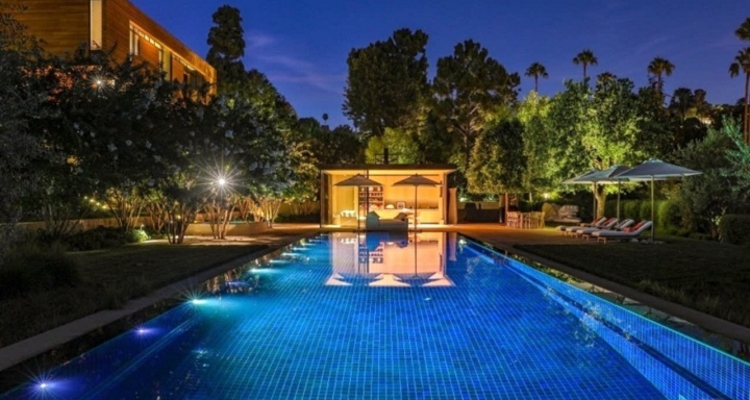 After selling The Warner Estate to Jeff Bezos for $165 million – David Geffen is buying a Beverly Hills mansion.

Geffen spent most of the quarantine in the Grenadines, humblebragging on his yacht. That stirred a huge social media backlash, with onlookers roasting Geffen for using a drone to snap a picture of the 450-foot pleasure boat for Instagram.

Now, David Geffen is buying the mansion set on a 3.3-acre property — north of Sunset Boulevard.

The land Geffen bought consists of three contiguous parcels. Frank Sinatra previously owned one parcel — Lew Wasserman, the Hollywood mogul, owned the other two. The seller was none other than Casey Wasserman, Lew’s grandson, and principal heir.

Wasserman acquired the estate in the early 2000s and bulldozed his grandfather’s old home. He then hired architect Richard Meier to design a large house, which was completed in 2016. The massive ultra-modern house spans more than 18,500 square feet and features six bedrooms and 16 bathrooms.

Aside from his new Beverly Hills acquisition, Geffen owns at least two other palatial residences.

He also has a $54 million penthouse on Manhattan’s Fifth Avenue and a $70 million estate in the Hamptons. Geffen’s superyacht, the ‘Rising Sun,’ is valued at $590 million.

Geffen’s purchase isn’t even the most expensive mansion sale in Southern California this year.

Geffen is known for founding Asylum Records, Geffen Records, and DGC Records, which is now Interscope Geffen A&M Records. He also co-founded DreamWorks Pictures in 1990 with Stephen Spielberg and Jeffrey Katzenberg. Geffen’s newest mansion set him back less than a third of what he made from selling The Warner Estate to Jeff Bezos in February.

Casey Wasserman founded a sports marketing and talent management company in 1998. He spearheaded Los Angeles’ bid for the 2028 Olympics and now serves as president of the Los Angeles Olympic Organizing Committee.