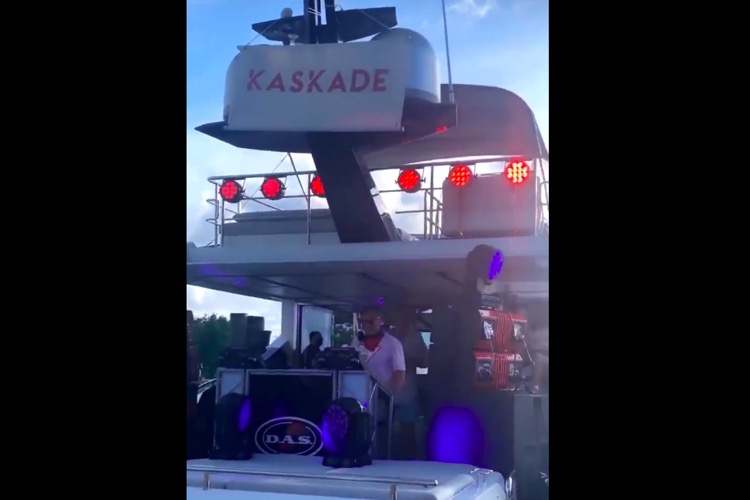 Rumors of the six-time Grammy nominee’s party-boat set began swirling on social media when one individual asked: “Is @kaskade playing an illegal boat party right now in Miami? Don’t lie.” The question’s answer was provided not by Kaskade himself, but by a different Twitter user yet, who responded with a sarcastic tweet and footage of a non-socially distanced gathering aboard a boat.

Situated behind a DJ turntable (and beneath a banner reading “Kaskade”), an individual resembling Kaskade is seen playing quick-moving electronic music throughout the 26-second-long clip. The footage seems to have derived from an Instagram account. (Said account’s owner, one Lauren de Kok, has set her profile to “private.”) The large, mostly maskless audience, for its part, looks to be prioritizing socializing over social distancing.

At the time of this writing, Kaskade hadn’t acknowledged the reported party-boat gig, and his latest message was published during the afternoon of Saturday, July 25th. It’s unclear whether the 49-year-old would be able to successfully employ an “international waters” defense in the courtroom, but on social media, many users are taking aim at him, his alleged concert, and those who attended the function.

“Are you seriously playing private boat parties in COVID hotspot Miami right now? As a native and music lover – this is beyond disappointing. I used to enjoy your shows but this is irresponsible and selfish,” slammed one former fan.

“Did Kaskade really throw a secret boat party in MIAMI out of all places? The epicenter of Covid,” inquired another disappointed individual.

Florida medical professionals have diagnosed approximately 424,000 COVID-19 cases to date – the most of any state besides California – and about 105,000 of the infections are attributable to residents of Miami-Dade County. The Florida county with the second most COVID-19 cases, Broward County, has reported a little over 49,000 infections.

Despite the substantial amount of pushback surrounding the possible Kaskade rave, an admittedly smaller number of fans are voicing their support for – or at least their desire to have attended – the boat party.

“Unpopular opinion: I wish I was at that Miami Kaskade boat party,” admitted one enthusiastic person.