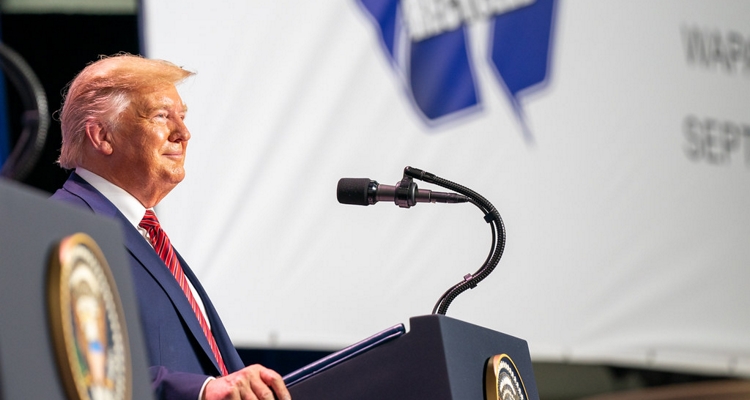 During a speech at a washing machine factory in Ohio, the Trump campaign played Guns N’ Roses’ ‘Live and Let Die’ — again.

The Guns N’ Roses’ cover of the Paul McCartney song blared over the loudspeaker before Trump appeared. This isn’t even the first time the song has played at a Trump visit, despite the eerie context. Back in May, the same GNR cover played as Trump toured a mask factory in Arizona.

The song was a stark reminder of the COVID situation in the US. Ohio Governor Mike DeWine was not in attendance at the event after testing positive for COVID-19. The disease killed 1,400 Americans the same day as GNR’s music blasted before Trump appeared, and the total coronavirus death toll in the US has surpassed 160,000 deaths. A model released by the White House projects an estimated 300,000 deaths by December.

Accordingly, Twitter had some choice song recommendations for future Trump engagements. “What about ‘Don’t Fear the Reaper?'” one person asked. “Queen’s ‘Another One Bites the Dust’ may be next on the docket,” another wrote. “If he’s gonna play a McCartney song, it should be ‘Back in the USSR,'” another user opined.

Both Guns N’ Roses and Axl Rose have publicly asked Trump to stop playing their music.

In response, GNR and Rose have created a charitable t-shirt with the slogan ‘Live N’ Let Die With COVID-45.’ All proceeds from sales of the shirt will benefit the MusiCares charity. Rose has also vented on social media about Trump’s use of the band’s songs.

“Unfortunately, the Trump campaign uses loopholes in the various venues’ blanket performance licenses that were not intended for such craven political purposes, without songwriters’ consent,” Rose wrote. “Can you say ‘s—tbags?!'”

Rose says he finds it ironic that Trump supporters listen to anti-Trump music at his rallies. “I don’t imagine a lot of ’em really get that or care,” he tweeted to his fans. GNR is joined by several other musicians who have publicly asked Trump to stop playing their music. Steven Tyler, Twisted Sister, Elton John, and The Rolling Stones have all sent cease-and-desist letters.

Taking things a step further, Neil Young recently launched a lawsuit against the campaign for its continued use of his song, “Rockin’ in the Free World.” The continued defiance of creators’ wishes is something BMI and ASCAP are working to stop, albeit with limited effectiveness. In particular, the Rolling Stones enlisted both PROs to help stop Trump’s campaign from playing their music, though Trump is showing little regard for the legal threats.