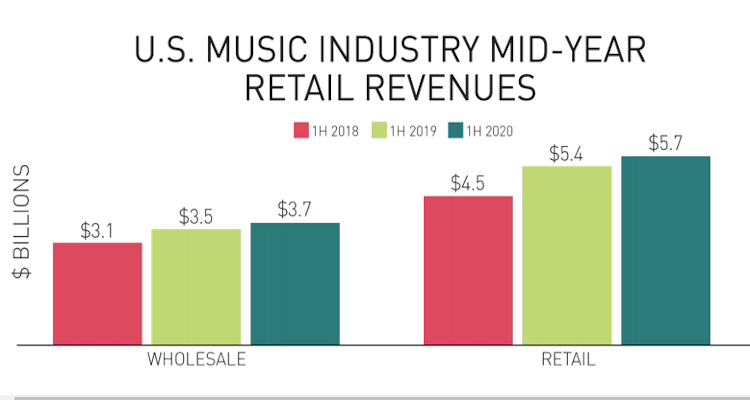 In spite of the novel coronavirus pandemic and its far-reaching economic impact, the music industry grew during 2020’s first six months.

At retail value, recorded music revenues experienced a 5.6 percent year-over-year increase, touching $5.7 billion between January’s start and June’s end. Predictably, streaming continued to build upon its years-running growth pattern, accounting for the vast majority (84.2 percent, or $4.8 billion) of the sum, up from 80 percent in Q1 and Q2 2019.

Within the category, paid streaming revenues jumped 14 percent (to $3.8 billion) year over year, accounting for a whopping 66.7 percent of recorded music’s total earnings. The average number of paid streaming subscribers hiked by nearly a quarter from 2019’s opening half, surpassing 72 million, and notably, ad-supported income also grew three percent, to $421 million, comparing the initial six months of 2019 and 2020. Previously, we reported that Spotify’s Q2 2020 advertising revenues had fallen 21 percent from Q2 2019, though YouTube revealed a small year-over-year boost in quarterly income deriving from adverts.

Streaming subscribers and earnings continue to climb. But digital download revenues (including from entire albums, individual songs, ringtones, and more) continued to decrease, finishing at $351 million through June 2020.

Next, digital and customized radio enjoyed a six percent year-over-year earnings improvement, crossing $583 million in 2020’s first half. The total came in at $553 million during the same period in 2019 and $527 million in the beginning two quarters of 2018.

Lastly, physical sales dipped 23 percent through June 2020, compared to the identical period last year. The analysis attributes a substantial portion of this downturn to the pandemic (and not solely the market’s ongoing shift to digital), for Q2 2020 physical revenues dropped substantially more than Q1 2020 physical revenues, once again in comparison to the same stretches in 2019. Half-year CD sales, for their part, declined by almost 50 percent.

Vinyl accounted for 62 percent ($232 million) of the physical sales sum and grew four percent year over year in terms of both Q1 and Q2. While the medium’s sales hiked in Q1, however, they experienced a small year-over-year fall in the second quarter. As an aside, Discogs relayed late last month that vinyl transactions – including pre-owned records, which are not reflected in RIAA data – are surging.