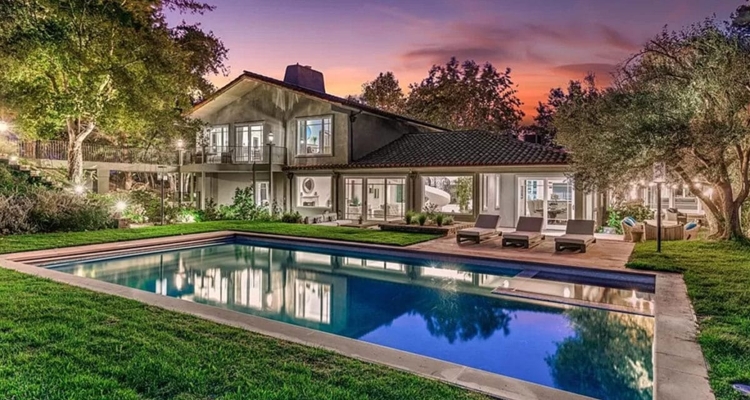 In the wake of an estimated $100 million Spotify podcasting deal, Joe Rogan has relocated to a $14 million mansion in Austin, Texas. Now, he’s putting his $3.2 million California property up for grabs.

The mansion itself was originally completed back in 1978. Rogan and his wife Jessica Ditzel purchased it in 2003 for a relatively modest $2.3 million. The two-acre, country-style mansion is set back and away from the main street, with a massive lawn around back. The lawn overlooks Los Angeles, with a vista of the entire city.

The massive pool and spa also overlook the city, with gorgeous views of California’s sunsets. It will be interesting to see how quickly this one disappears.

The move comes on the heels of Joe Rogan’s high-profile deal with Spotify, valued at an estimated $100 million.

That strongly suggests a financial motivation for the move: Rogan has openly pointed to problems with California’s high taxation structure, making the high-tail to Texas a logical choice. But Rogan has simply become fed-up with California on a number of fronts, including its heavy-handed COVID-19 response and overbearing level of regulation.

“The thing is, you can be socially liberal, but understand that some things are not wise, and a lot of those things are ruining California,” Rogan recently stated in a podcast interview with Wesley Hunt, a candidate for Texas’ 7th Congressional District.  “There’s overregulation in California, it’s off the f—king chart.  The taxes are so crazy there, and they’re trying to raise them up to 16.8%.  And then what are you going to do with that money?  F—k it up worse, you’re going to have more money to f—k things up?

“I just don’t understand their logic of opening and not opening things, especially now when you look at the deaths.  You want to talk about COVID cases — the cases are low, they’re not that high, and the deaths are very low. We’ve kind of gotten a handle on what this is. You can let people open up their businesses. You can let people wear masks, and be careful, and take care of themselves, and take vitamin D and zinc and vitamin C, and we can at least get back to some semblance of normality. But they don’t want to do that.”

Rogan pointed to lockdown rules that appear motivated by politics.  “They keep saying, ‘after the election’.  They’re not even trying to hide the fact that they’re politicizing this.  They won’t let kids go back to school until after the election.  What the f—k does the election have anything to do with this? How is that scientific? How is November 3rd your science point?  It’s not.”

Rogan is clearly not conflicted about the move.  But Rogan also has another California property, an ultra-modern mega-mansion that hasn’t been put on the market – at least not yet.

Rogan reportedly paid $4.95 million for his second Bell Canyon mansion back in 2018.

At the time of that purchase, Rogan was estimated to have a $25 million net worth. His recent deal with Spotify has certainly bumped that number up quite a bit. As mentioned, Spotify is reported to have paid around $100 million to secure exclusive rights to The Joe Rogan Experience podcast.

The deal came with a few caveats, however. Despite telling listeners that Spotify would have no editorial control over the show, fans soon noticed missing episodes. Controversial episodes featuring personalities like Alex Jones and Milo Yiannopolous are missing. But Spotify’s employees are also asking the platform to exercise more control over who Rogan interviews, while pushing for direct editorial oversight and even the power to veto entire shows.

In July, Rogan spoke with author Abigail Shrier, who wrote a book called Irreversible Damage: The Transgender Craze Seducing Our Daughters. The episode sparked a heated controversy, with employees demanding its removal. So far, the episode remains available, though other notable, controversial episodes are missing.

Rogan’s leaving behind quite a nice California spread.

It has five bedrooms, five bathrooms, and a massive 7,573 square feet footprint in Bell Canyon. The main level features a lounge room, a great room, a formal dining space, and a kitchen for hosting. Other notable amenities on the property include a home office and library, meditation atrium, media room, game room, outdoor dining area, pool + spa, and a massive gym tailored with MMA training gear.

The estate itself is posh, but dwarfed by the look of Rogan’s $14.4 million Austin mansion.