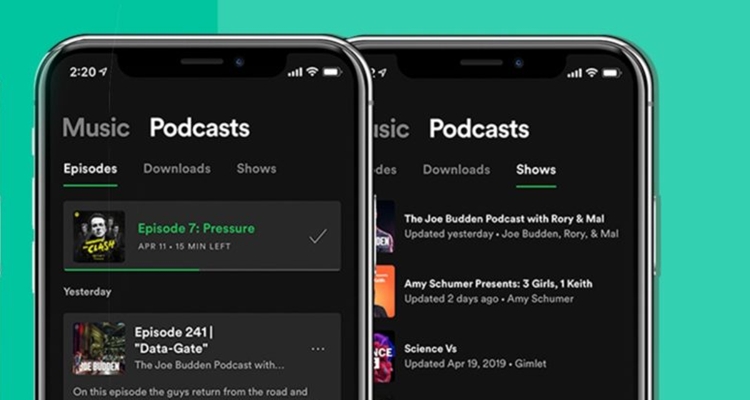 Spotify has become an underground hub for new music bootleg remixes, which are uploaded to the service as podcasts. The bootleg remixes hide in plain sight with certain keywords. Some of the most popular are “chopped and screwed,” “slow and reverbed,” “remix,” and “mashup” for pop mashups.

Just one example of this is the late rapper Juice WRLD, who has tons of podcast series. His podcast playlists contain unreleased songs, listing the tracks as individual episodes of user-created podcasts. For what it’s worth, Spotify’s podcast user agreement explicitly forbids this behavior. But that hasn’t stopped users from using the feature to get around Spotify’s piracy filters.

After Variety discovered the phenomenon, Spotify released a statement. “We take intellectual property infringement extremely seriously. Spotify has multiple detection measures in place monitoring abuse on the service to detect, investigate, and deal with such activity. We are continuing to invest heavily in refining those processes and improving methods of detection and removal, and reducing the impact of this unacceptable activity on legitimate creators, rights holders, and our users.”

U.S. copyright law is very specific about derivative works, under which these remixes may fall. The derivative works may not fall under fair use, which means they could be prosecuted in court. Labels and artists may be hesitant to pursue cases like this, though, since it’s usually their hardcore fans making these unauthorized remixes. People who upload the remixes to Spotify are using pseudonyms to do so.

While Spotify has its own trouble fighting remixes as podcasts, TikTok users are remixing songs at a feverish rate. Some of the most popular tracks on TikTok this year were remixes of popular songs. TikTok’s rise in popularity as a music mashup platform is leading to some interesting unofficial projects, too.

The Ratatouille: TikTok Musical stream is just one example of this. The project is not officially sanctioned by Disney at all, yet it has Broadway talent behind it. The one-off stream will showcase some of the original songs TikTok creators have written in tribute to Ratatouille, a Disney-Pixar film. A star-studded Broadway cast will bring the performance to life to benefit the entertainment industry workers impacted by the pandemic.

It’s a unique look at how bootleg remixes and unique creations influence the music industry in new ways. While many legal teams may be chomping at the bit to get these bootlegs removed, marketing teams view them differently.

The viral nature of TikTok also has older bands like Fleetwood Mac going viral again, reaching entirely new audiences. Bootleg remixes are doing that on TikTok and now Spotify, too.