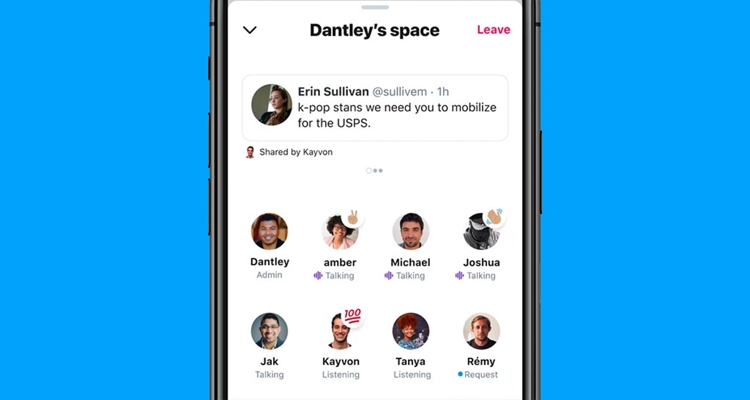 Clubhouse is still in its invite-only, iOS phase of development. Meanwhile, Twitter has been working overtime to expand its audio rooms called Spaces to Android. The feature rolled out to Android users earlier this month but without the ability to create rooms. At the time, Android users could only join rooms created by Twitter Spaces iOS users.

Now Twitter is giving Android users the ability to create their own Spaces. That brings the Twitter Spaces feature parity across both iOS and Android devices. Clicking the action button in the Twitter app will bring up a number of options. A new ‘Spaces’ button appears at the very top above ‘Gif’ and ‘Photos.’ Tapping on the ‘Spaces‘ button brings up a window to start your own space.

Clicking the blue button creates a public space that anyone can join. Spaces hosts can turn on/off their microphone, enable captions, turn on sound effects, and invite other people to the space via DM or link. The feature draws much inspiration from Clubhouse, which could still be a few months away from launching on Android.

Social media giants like Twitter, Facebook, and Instagram are constantly scouting the next-big thing. Drop-in audio chatrooms pioneered by Clubhouse during the pandemic have taken off. Twitter Spaces may have beaten Clubhouse to Android – but it’s not the only giant working on drop-in audio features.

Clubhouse has been installed an estimated 5.5 million times, despite its iOS-only, invite-only nature. Facebook wants to capitalize on Clubhouse’s popularity before it reaches mass adoption, like TikTok. According to a New York Times report, “Facebook executives have ordered employees to create a similar product.”

Facebook wants to be the dominant way people engage with each other on the internet. Cloning products left and right is all the company has left at this point. Stories is a Snapchat clone, Reels is a TikTok clone, and whatever Facebook names its Clubhouse clone will serve the same purpose. But no matter how many times Facebook tries to capture lightning in a bottle – young people hate it.

Edison Research studies from 2017 to now show Facebook’s market share among the younger demographic is declining. Meanwhile, growth on TikTok, Twitter, and Snapchat continue. Copying new features like Clubhouse may help Twitter stay relevant, but it should be careful not to fall into the same trap Facebook has.