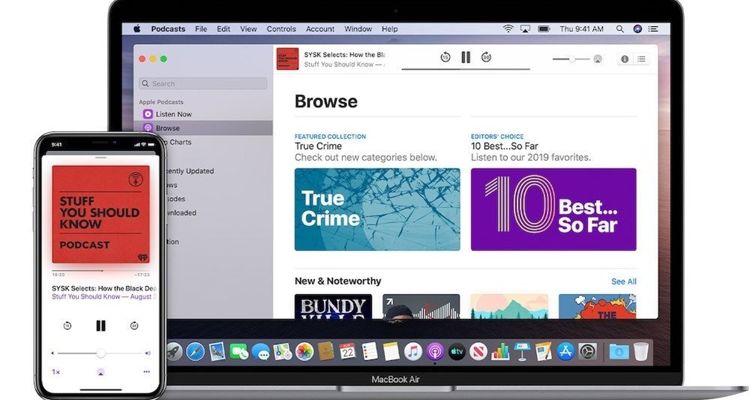 Apple is hosting a special event tomorrow that is expected to launch a number of new products. That includes a new iPad Pro model and a refresh of the iMac line-up. But aside from the new hardware, it appears Apple may give its services arm a boost.

Vox Media reporter Peter Kafka claims he is “pretty sure Apple is prepping its own podcast plan, a paid service, on Tuesday.” Now, that’s nowhere near a confirmation – but it is a repeat of a rumor we’ve heard before. App reverse engineers even found evidence of an Apple podcast subscription service in the iOS 14.5 beta, which includes a new account button in the Listen Now tab.

That rumor suggested Apple was considering introducing the subscription option with exclusive content. It’s the same approach Spotify has taken to dominating the podcast market – buying up content to make it exclusive to its platform. Joe Rogan is perhaps the biggest acquisition under Spotify’s podcast belt, but it’s by no means the only one.

Apple is no stranger to developing exclusive content for its users, either. It has already created Apple Original podcasts to complement its Apple TV+ shows. That includes podcasts with Oprah, as well as promoting several other shows to its captive audience. If a paid Apple podcast subscription is on the way, expect Apple to bundle it into Apple One.

Subscription fatigue is something that is very real in today’s digital world. Apple has to be careful about offering too many options, which is why its subscription bundle is genius. Even if you only plan to use one or two things in the bundle, the price difference makes sense for consumers.

It will be interesting to see if Apple is ready to do battle with Spotify over podcast territory. Apple was the sleeping 800 lb gorilla in the podcast space for more than a decade. Now the landscape is changing, and that gorilla is waking up and ready to claim new territory.

Spotify is facing renewed struggles with its own podcast acquisitions. The Joe Rogan acquisition has caused quite a bit of controversy for removed episodes on its platform. Other podcast outlets are unionizing for better pay, benefits, and annual raises for the content they produce.