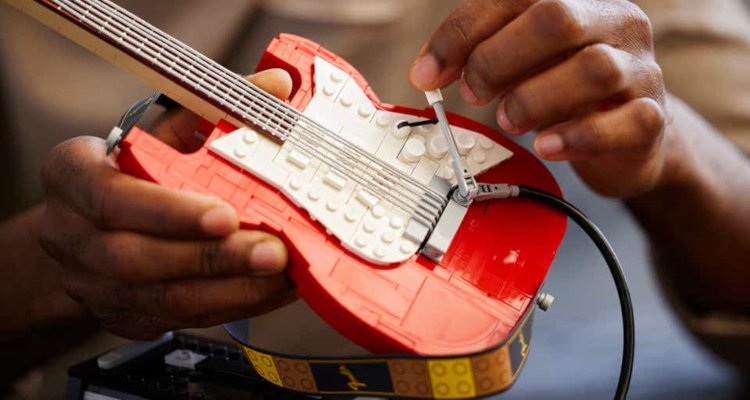 Lego has officially unveiled a 1,074-piece 1970s Fender Stratocaster set, complete with a roughly 14-inch (36-centimeter) replica of the iconic guitar, a foldable stand, and even a miniature 1965 Princeton Reverb amp.

Higher-ups at Billund, Denmark-headquartered Lego Group detailed the Lego Ideas Fender Stratocaster set – which will become available to fans on Friday, October 1st – via a formal release that was shared with Digital Music News. Slovakia-based fan designer Tomáš Letenay submitted the idea for an all-Lego Stratocaster to the Music to Our Ears competition last year, and Lego’s reviews board “loved the creation so much they commissioned it.”

Designed for fans age 18 and up, the 89-year-old company’s decidedly detailed Lego Fender Stratocaster set will assemble to resemble either a red or black guitar, with both models boasting “six strings, poseable tuning pegs, [a] pickup switch and [a] whammy bar,” according to the item’s listing.

Also included are a “textile strap and rubber cables for the guitar,” a footswitch, and all manner of internal components for the Princeton Reverb amp, which itself features removable panels designed to enable close-up viewing of the “motherboard, reverb tank and speaker.”

Explaining the inspiration behind the $99, €99, and £99 product, designer Tomáš Letenay said in a statement: “I used to play electric guitar when I was a teenager and I always dreamed of owning a Fender Stratocaster – but I could never afford it. The competition on LEGO Ideas gave me the chance to create it in LEGO bricks. The Stratocaster was my gateway into music and I love seeing my LEGO design with the stand. I am hoping that other guitar fans get as much joy out of building it as I have.”

It remains to be seen whether Lego will roll out additional instrument sets moving forward, but it’s worth noting on this front that the company inked a major partnership agreement with Universal Music Group back in April of 2020.

Interestingly, the companies’ deal kicked off not with a collection of Lego sets involving leading UMG artists, but with Lego VIDIYO, “a playful and innovative music video maker experience designed to celebrate and expand children’s creativity and passion for music.”

The platform was built for users between the ages of seven and 10, Lego indicated upon announcing VIDIYO earlier this year, and is meant to be “a safe universe where they can traverse the worlds of physical and digital play.” It bears mentioning in conclusion that UMG last month finalized a partnership with London-based children’s media company Moonbug Entertainment.