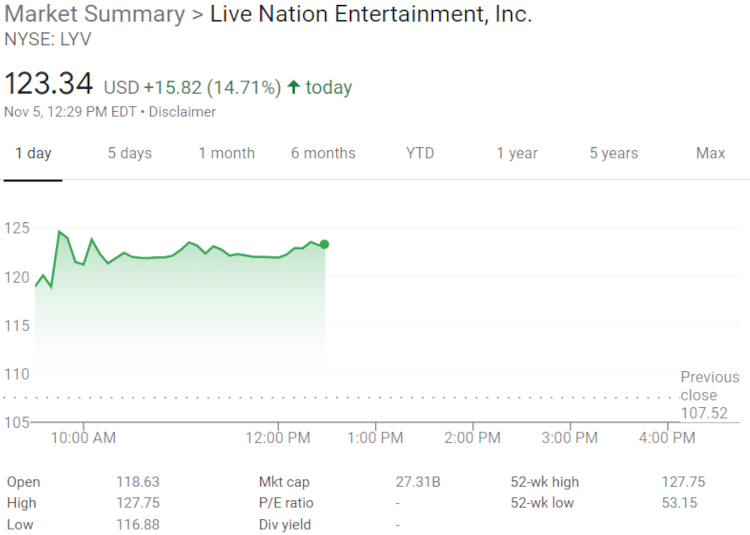 The Beverly Hills-based concert promoter just recently disclosed the bold statement as well as its earnings specifics for July, August, and September of this year. Within the quarter’s $2.7 billion in total revenue, concerts and music festivals generated approximately $2.15 billion – up from $154.8 million during Q3 2020.

Live Nation’s Ticketmaster, for its part, posted income of $374.2 million on the quarter (against a $19.8 million loss across the identical stretch in 2020), while “sponsorship & advertising” improved from $47.9 million to $174.4 million.

Similarly, Live Nation’s third-quarter operating income jumped from a more than half-billion-dollar loss in Q3 2020 to $137.1 million in Q3 2021, as concert losses managed to decrease by $248.80 million year over year. Ticketing rebounded from a $197.4 million loss to surpass a record $114 million gain during this year’s third quarter, whereas sponsorship and advertising enjoyed an $89 million YoY boost.

Notwithstanding these massive gains, though, Live Nation’s financials through 2021’s initial nine months appear to reflect the unprecedented financial and operational impact of COVID-19 lockdown measures. From January’s start until September’s end, Live Nation in 2021 made $3.57 billion, the earnings report shows – with the previously noted $2.7 billion (over 75 percent) having derived from Q3 alone. Moreover, total shows during Q1, Q2, and Q3 2021 finished at 7,947 – up just 360 concerts from 2020’s opening nine months.

Despite the far-reaching obstacles that the live-entertainment sector endured during 2020 and the beginning of 2021 – as well as ongoing cancellations and delays – Live Nation execs struck an optimistic tone when discussing the outlook of Q4 2021 and the entirety of 2022.

Noting that “overall ticket sales for major festivals were up 10% versus 2019,” Live Nation president and CEO Michael Rapino proceeded to acknowledge that this bolstered demand “also enabled improved pricing, with average amphitheater and major festival pricing up double-digits versus 2019.” The increase came in at 17 percent for amphitheaters specifically, hiking to an average of $63 per pass, Live Nation CFO Joe Berchtold communicated during a Q3 earnings call.

Attendees likewise dropped more cash at Live Nation events on the quarter, continued Ontario-born Rapino, “with on-site spending per fan up over 20% in amphitheaters and festivals compared to 2019.” (Berchtold placed “average fan spending” for on-site transactions at $36, up 25 percent YoY.)

A staggering 22 million tickets have already been sold to Live Nation events in 2022, per the text, with tours from Coldplay and the Red Hot Chili Peppers having thus far moved north of one million tickets apiece. (Fans have purchased over 500,000 tickets to “several other tours” from Live Nation, the document states.)

“I fully expect we will continue to have bumps in the road in the coming months, and it will take some time for international artists to be touring on a truly global basis, but the fundamental strength of live entertainment and Live Nation has proven out, and I expect we will only continue to grow from here,” finished Rapino, whose company has resumed making multimillion-dollar investments and opening new venues.

Regarding Live Nation’s longer-term outlook, Rapino also said during the earnings call that 2022 “is going to probably be a record year,” while 2023 and possibly 2024, owing to a “backlog” of gigs, “will be incredibly strong years” as well. Lastly, Berchtold relayed that fans in the U.S. and the U.K. accounted for 95 percent of Live Nation customers in Q3 2021 – up from 75 percent in Q3 2019.

At the time of this piece’s writing, Live Nation stock was up more than 14 percent from yesterday’s close, for a per-share price of $123.34. LYV briefly touched an all-time-high of $127.75 per share shortly after the market opened, and the stock’s present value marks an approximately 74 percent jump since 2021’s beginning.