How the ‘Stairway To Heaven’ Case Could End Stupid Copyright Lawsuits 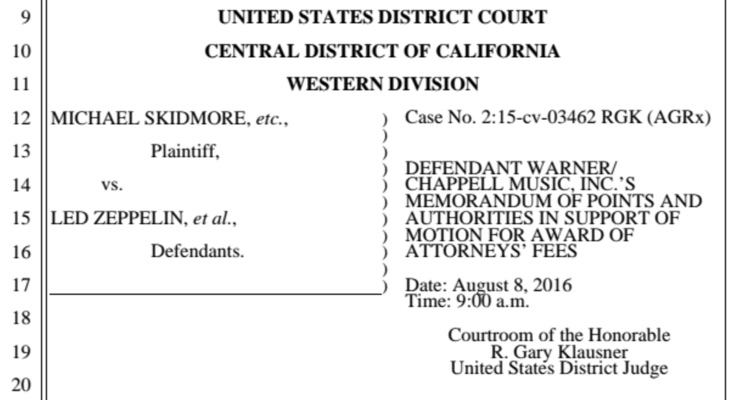 Led Zeppelin won their ‘Stairway to Heaven’ suit.  What happens next could have chilling effect on future, frivolous copyright challenges.

What’s one way to protect yourself against frivolous lawsuits?  Set a brutal example against a flimsy case, with fines and penalties that seriously scare away the next half-baked litigant.

Enter Warner/Chappell, the publisher of Led Zeppelin’s iconic ‘Stairway to Heaven’ song.  The company is now seeking $800,000 in restitution after winning their copyright infringement case against Michael Skidmore, the trustee of Spirit band member Rande Wolfe.  The fees include $613,471 in attorney’s fees, with the rest of the costs coming from experts and witnesses.

Of course, Zeppelin prevailed in their case, but wasted a lot of time and money in the process.  On June 23rd, a California federal Jury officially rejected claims that Led Zeppelin stole the opening riff to their hit song ‘Stairway To Heaven,’ while referencing endless examples of the same progression in earlier examples.  Slam dunk case, but one that also opened a potential Pandora’s Box of future, frivolous cases, especially given the band’s known history of plagiarism and reliance on common chord structures and rhythms.

The accusation was that Zeppelin blatantly lifted the critical guitar progression in ‘Stairway’ from a song called ‘Taurus,’ originally composed and performed by the rock band Spirit.  Warner/Chappell says that it “successfully defended plaintiff’s attempt to wipe Stairway to Heaven off the map and, in doing so, defendants furthered the important copyright purpose of enriching the general public through access to creative works.”

Adding to the problematic defense was Francis Malofiy, the attorney for the Michael Skidmore behaved in an unruly manner during the case. Throughout the six-day trial, Malofiy had over one hundred sustained objections from Judge R. Gary Klausner, and also showed a video that was not previously approved to be played during trial.  Malofiy ultimately got suspended after the trial’s conclusion, but suspicions were raised as to what the true intentions of the case were.

There are parallel developments that could seriously lower frivolous copyright challenges.  Last month, due to the sheer volume of copyright infringement lawsuits, an opinion from the Supreme Court deemed that the winning party in copyright infringement cases should be awarded attorneys fees and any other fees incurred during the case.  That is, if the case is deemed ‘frivolous’.

Warner/Chappell obviously believe that the lawsuit was in fact frivolous.  Aside from Malofiy’s behavior during the case, the attorney ultimately filed a lawsuit over a guitar progression that is knowingly in the public domain.

The hearing is scheduled for August 8th.