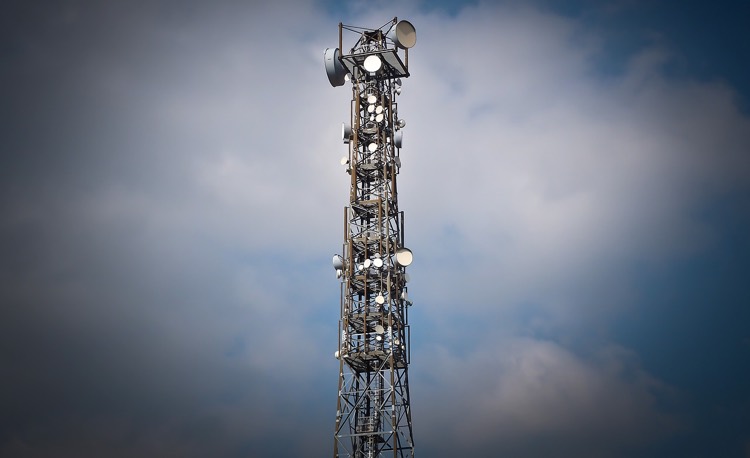 It started in a small pirate station in Seattle.  Now, hackers are hijacking major radio stations and blaring ‘Fuck Donald Trump’ on repeat.

The following is a developing story.  Please check back for ongoing updates!

How does one hack a radio station, exactly?  Good question, though perhaps the adage, ‘anything can be hacked’ goes far beyond the web.

According to numerous local reports, a number of major radio stations are getting hacked.  Their playlists are then getting replaced by non-stop spins of ‘Fuck Donald Trump,’ a track by rappers YG and Nipsey Hussle.

The track itself was released ahead of the November election, though obviously it didn’t sway enough voters.  But it’s anti-Trump message is certainly resonating with disaffected Americans.

This first started on a pirate station in Seattle.  In the solidly anti-Trump city, the song was placed on repeat on frequency 101.9.   We’re not sure exactly who orchestrated that stunt, but it now looks like dozens of stations across the country have played the song multiple times this week.  That includes Seattle, Louisville, Salem, North Carolina, and San Angelo, Texas.

The station in North Carolina, Sunny 107.9 WFBS-FM, has been getting a bulk of the attention so far.  The radio station reported that hackers had infiltrated its on-air playlists via an internet-connected programming application.  The station issued a strong statement after the incident, and report the hack to the Federal Communications Commission (FCC).

Sunny’s Facebook response has now been deleted.  Though here’s what they first posted. 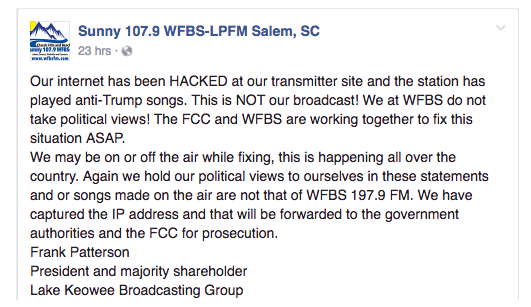 The station has now resumed playing soft rock hits like ‘She’s Like the Wind’ by Patrick Swayze.  (That’s actually the track that was playing while this article was being written).

Other affected stations include a San Angelo, Texas soul and oldies station.  Also hacked was El Jefe 96.7, a Spanish-language station based in Murfreesboro, Tennessee; 103.5 in Evansville, Indiana; and Crescent Hill Radio in Louisville, Kentucky.

Perhaps this is the start of a far bigger ‘virus’.  In nearby Mooresville, North Carolina, the audio feed of cable TV provider MI-Connection was taken over by the track.  Viewers watching a Davidson College basketball game were treated to the supplanted audio.  “We have since been informed by WHIP that someone hacked into the IP address of the receiver MI-Connection uses to convert the audio feed to channel 4,” the station informed.

So far, there’s been no response from the White House.

The track itself has now been viewed more than 15 million times on YouTube.  And, that doesn’t count remixes by Macklemore and G-Eazy.  All of which is good news for YG and Hussle, though we’re not sure they’re getting ASCAP royalties from their recent spins.